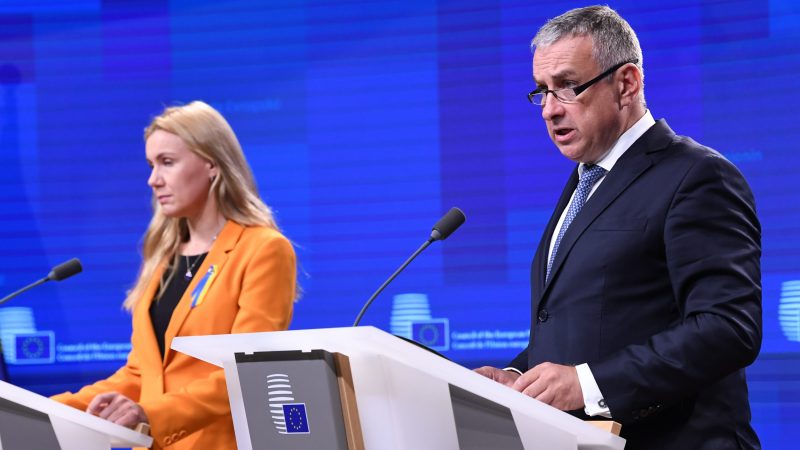 Gas prices have hit historic highs in Europe, spilling over onto the electricity market and exacerbating the energy crisis triggered by Russia’s war in Ukraine.

“Together with the Commission, we need to work swiftly and prepare a coordinated solution on the EU level in order to mitigate the high energy prices as soon as possible,” said Czech industry and trade minister Jozef Sikela, who was chairing the Brussels meeting.

EU energy ministers invited the European Commission to propose a price cap for gas by mid-September but left the details for Brussels to decide.

A further ministerial meeting will be convened in the coming weeks to hammer out the final details.

At this point, however, views still differ on whether the price cap should apply to all gas imports or to Russian gas only.

Last week, European Commission President Ursula von der Leyen said she was personally in favour of a price cap on imports of Russian pipeline gas, even though this is likely to escalate tensions with Moscow, which threatened to cut off supplies to Europe entirely in retaliation.

“I firmly believe that it is now time for a price cap on Russian pipeline gas to Europe,” von der Leyen said on Friday (2 September).

Germany, for its part, suggested that a complete stoppage in Russian gas imports would not do more harm to its economy since Moscow has already halted deliveries through the Nord Stream 1 pipeline last week.

“Germany no longer gets Russian gas and we can still store it,” said German economy and climate minister Robert Habeck. “This means that the market no longer expects us to collapse if there is no Russian gas.”

There is a “prevailing view” that a price cap is needed, but the European Commission and EU countries need more time to “fine tune” how the cap should be implemented, Sikela told journalists after the meeting.

There is a “division of opinion” and it is up to the Commission to work it out, said Dutch minister Hans Vijlbrief.

A Commission non-paper on ways to tackle the energy crisis was positive about a price cap on Russian gas imports, saying the EU has already reduced its dependence on Russian gas, making it a “feasible option” that would hit the Kremlin’s coffers.

But while some countries are in support, others, such as Austria and Hungary, are concerned about the consequences of such a measure, which could see Russia cut all gas supplies to the EU in retaliation.

“If price restrictions were to be imposed exclusively on Russian gas, that would evidently lead to an immediate cut-off in Russian gas supplies. It does not take a Nobel Prize to recognise that,” said Hungarian Foreign Minister Peter Szijjarto.

Speaking ahead of the meeting, an EU diplomat said the cap did not have support from a majority of countries.

“Further work” is needed on possible options for a price cap on gas imported “from specific jurisdictions”, according to a summary of the meeting by the Czech government, which currently holds the rotating EU Council Presidency.

As an alternative, several ministers asked the Commission to study a price cap on all EU gas imports, including liquified natural gas (LNG) which is today coming mostly from the US and Qatar.

However, EU energy chief Kadri Simson said a blanket price cap on all gas imports “could present a security of supply challenge” for Europe, which is now increasingly dependent on LNG for which there is strong competition on global markets.

Other countries, meanwhile, are open to different options. For instance, French energy minister Agnès Pannier-Runacher said Paris would “support a mechanism to cap Russian pipeline gas deliveries” if the European Commission decides to put forward such a proposal.

Regarding suggestions to cap all gas imports, she said France has “a rather open position on this measure provided that we look at exemptions” that allow EU energy companies to buy gas above the market price in order to protect security of supply.

According to Vijlbrief, there was “broad support” for the EU executive’s suggestion to cap the revenues of so-called inframarginal power producers – such as renewables, nuclear and lignite – which have low operating costs and have benefitted the most from high gas prices.

The revenue would then be recycled to support households and consumers struggling with high energy bills.

Ministers invited the European Commission to table a proposal by mid-September, alongside similar measures to skim the unusually high revenues made by oil and gas companies.

According to the Czech summary document, ministers also want the EU executive to draw up “emergency liquidity instruments that would ensure that market participants have at their disposal a sufficient collateral to meet margin calls and that would address increased volatility in futures markets.”

Alongside this, ministers invited the Commission to present a proposal to incentivise coordinated electricity demand reduction across the EU.

At the press conference, Sikela said he expected this to be similar to the gas demand reduction target agreed in July, with a voluntary target at the beginning and the possibility of a mandatory one if the situation worsens.

However, Simson suggested the Commission was ready to go further. “Indeed, member states are usually very reluctant to support binding measures, but this is exactly what the Commission is considering, that we will propose binding electricity reduction targets at peak hours,” she said.

While the Dutch are in support of such a target, “some people don’t like the word mandatory” Vijlbrief commented.

The European Commission is expected to propose the measures on Tuesday (13 September) and Sikela indicated the Czech Republic wants to pass them as quickly as possible.

Whatever the EU does, though, it may not take away the full blow of the energy crisis, Irish energy minister Eamon Ryan warned.

“We have to be honest with our consumers, households, businesses, that we can’t cushion the full blow here, but what we need to do is cushion some of the blow, to actually do what we can,” he said.