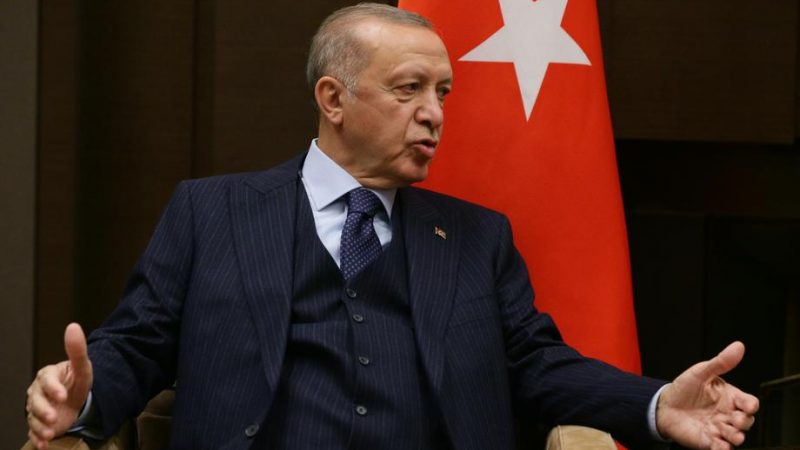 Turkey and Israel can work together to carry Israeli natural gas to Europe and the two countries will discuss energy cooperation during talks next month, Turkish President Recep Tayyip Erdoğan was quoted as saying on Friday (4 February).

The two countries expelled their ambassadors in 2018 after a bitter falling-out. Ties have remained tense since with Ankara condemning Israel’s occupation of the West Bank and its policy toward Palestinians, while Israel has called on Turkey to drop support for the militant Palestinian group Hamas which rules Gaza.

However, Turkey has been working to repair its strained ties with regional powers as part of a charm offensive launched in 2020. In an apparent easing after years of animosity, Erdoğan said on Thursday that Israeli President Isaac Herzog would visit Turkey in mid-March.

“We can use Israeli natural gas in our country, and beyond using it, we can also engage in a joint effort on its passage to Europe,” Erdoğan told reporters on a return flight from Ukraine.

“Now, God willing, these issues will be on our agenda with Mr Herzog during their visit to Turkey,” he was quoted by Turkish TV media as saying.

While Erdoğan has spoken to Herzog amid tensions before, the Israeli presidency is a largely ceremonial role. In November, he spoke to Israeli Prime Minister Naftali Bennett, the first such call in years.

The discovery in recent years of huge natural gas reserves in the eastern Mediterranean has whetted the appetite of nearby countries but exacerbated geopolitical tensions between Turkey and its neighbours.

To transport this abundance of gas to the rest of Europe, and help meet its aim of reducing energy dependence on Russia, Cyprus, Greece and Israel struck an agreement in December 2018 to build a gas pipeline, called East Med.

This 1367-mile pipeline is set to pass 106 miles south of Cyprus and end in Otranto, in southern Italy after crossing the Greek island of Crete and mainland Greece.

However, as EURACTIV recently reported, the US appears to having lost interest in the EastMed, which has opened the way to new geopolitical constructions.

Several Greek media reported that Joe Biden’s move politically winks at Turkey, who since the beginning has opposed the EastMed deal as it was bypassing it.

Washington’s U-turn on the EastMed pipeline project caused shockwaves in Athens, with the main opposition Syriza party accusing the conservative government of not negotiating at all its deals with the Americans.

Particularly, former Foreign Affairs Minister George Katrougalos said the US “sold Greece out”, which was even more insulting following a recent Greece-US deal to prolong the existence of American military bases in the Mediterranean country.

“While the ink of the agreement has not yet dried […] the US is selling us out on the EastMed case,” he said.

Katrougalos called on the government to pursue a more “active” approach in foreign matters and rejected the government’s argument that Turkey was “isolated”.

Erdoğan on Wednesday met Nachirvan Barzani, the president of Iraq’s semi-autonomous Kurdish region. Asked what was discussed, Erdoğan said Ankara wants to sign a natural gas supply deal with Iraq and is holding talks on this.

“We have now taken the Iraq issue on our agenda. We are now thinking about it. There may be a supply on the natural gas side from Iraq to Turkey,” Erdoğan said, adding Barzani had promised to facilitate talks.

Turkey is already importing oil from Kirkuk in northern Iraq to the Turkish Mediterranean port of Ceyhan, where it is loaded onto ships and exported mostly to European buyers.

The 960km (600-mile) Kirkuk-Ceyhan pipeline has frequently been the target of attacks by the outlawed Kurdistan Workers Party (PKK) which is aligned against the KRG and has fought a decades-long rebellion against Turkish government.

Last year, the pipeline carried about 450,000 barrels per day. In addition to Iraqi government oil, it is also the only pipeline for the Kurdistan Regional Government (KRG) to export crude oil.

Turkey maintains a military presence in northern Iraq and regularly carries out air raids and ground operations against PKK forces there, which operate out of the Qandil Mountains.