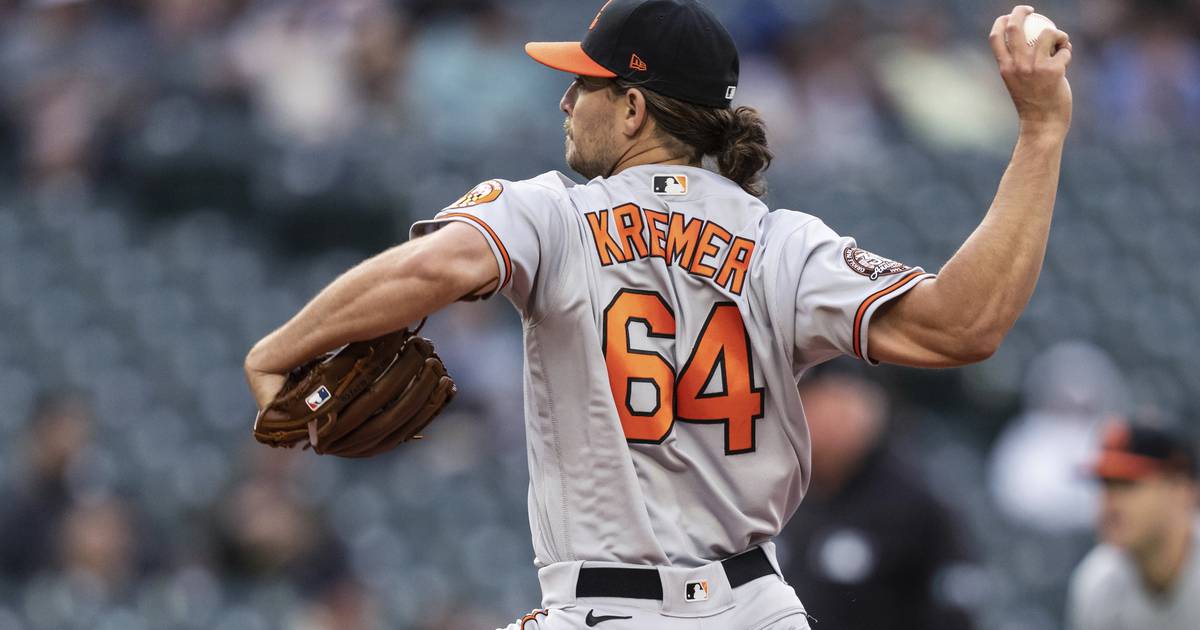 SEATTLE — Jesse Winker drove in two runs with a go-ahead double in the eighth, Robbie Ray allowed just one hit over seven innings and the Seattle Mariners beat the Orioles, 2-0, Tuesday night.

Both teams struggled at the plate early, before the Mariners (35-41) finally broke through in the eighth.

The Orioles’ only hit in the game came with one out in the fourth when Ryan Mountcastle lined a single into center field off Ray. Ray pitched seven scoreless innings, with three walks and eight strikeouts on 98 pitches but didn’t figure in the decision.

In his past four games, the left-handed Ray has allowed two earned runs, 11 hits, seven walks, and three hit batters over 27 innings, with 28 strikeouts.

But the Mariners failed to muster any run support for Ray. Orioles (35-41) starter Dean Kremer kept the Mariners off the board with seven scoreless innings of his own. Kremer allowed four hits with four strikeouts and two walks on 97 pitches.

Kremer’s three straight scoreless starts of at least five innings is tied for the longest such streak in Orioles franchise history, according to MLB.

The Mariners threatened in the bottom of the fourth, loading the bases with one out. But Taylor Trammell grounded into an inning-ending double play. Trammell left the game with a right hamstring strain.

Diego Castillo (5-1) pitched a scoreless eighth inning for the Mariners. The third out in the inning came when first baseman Carlos Santana leaped for a high throw from Eugenio Suarez and tagged out Austin Hays while in the air.

Paul Sewald pitched a scoreless ninth and earned his seventh save.

Cionel Perez (4-1) took the loss after allowing Crawford and Rodriguez to reach in the eighth.

Mariners: OF Mitch Haniger took on-field batting practice for the first time since suffering a Grade 2 ankle sprain on April 29, but said that the biggest test in his eventual return will be sprinting and agility work. Haniger is hoping to be back in mid-July. … OF Kyle Lewis (concussion) took batting practice Tuesday. There is still no timeline for his return, but manager Scott Servais said Monday that Lewis is getting close to going on a minor-league rehab assignment.

Orioles: INF Ramon Urias (oblique) took infield and batting practice Tuesday. Manager Brandon Hyde is hopeful that Urias won’t be out much longer, though he cautioned that oblique injuries are “always a little bit tricky.”

Mariners: Seattle will start RHP Chris Flexen (3-8, 4.31) on Wednesday in the series finale. Flexen got the win against the Angels in his last start on June 24, going five innings while allowing five hits and three earned runs.

Orioles: Baltimore’s starter for Wednesday will be RHP Austin Voth, a Kent, Washington, native who will be making his third start of the season. Voth has a 7.81 ERA in 27 2/3 innings pitched so far this year.