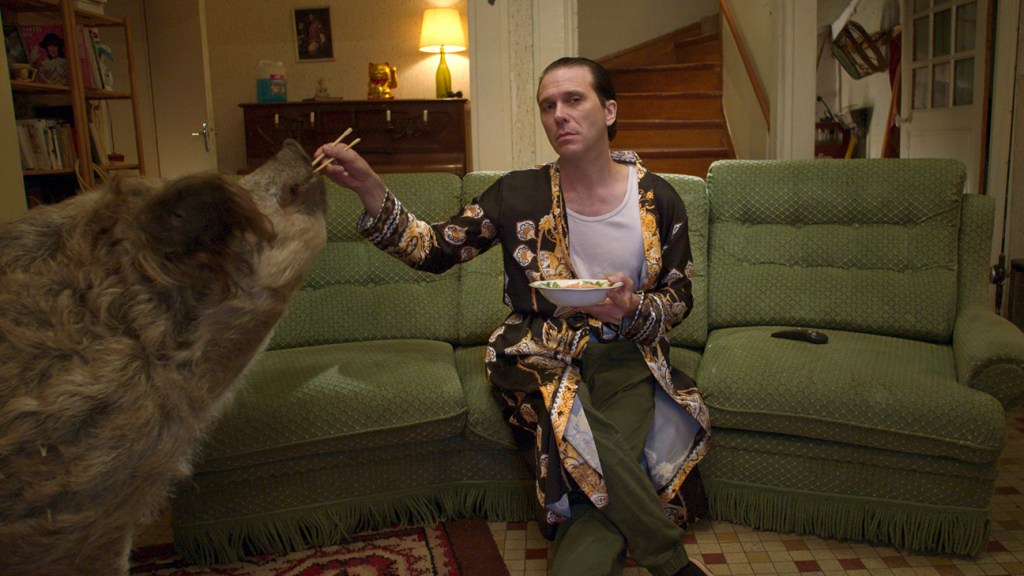 Dark Star Pictures has landed North American rights to a couple of outlandish films that hit the festival circuit in 2021, Mother Schmuckers and Bloody Oranges, with theatrical releases planned for both.

The directorial debut of Harpo and Lenny Guit, absurdist comedy Mother Schmuckers had its world premiere at last year’s Sundance Film Festival, followed by showings at the Fantasia Film Festival and Fantastic Fest. The film follows Issachar and Zabulon, two brothers in their twenties who are supremely stupid and never bored, as madness is part of their daily lives. When they lose their mother’s beloved dog, they have 24 hours to find it — or she will kick them out. The film stars stars Harpo Guit alongiside Maxi Delmelle, Claire Bodson and a fun supporting turn from Mathieu Amalric (The French Dispatch, The Sound of Metal) and was produced by David Borgeaud and Erika Meda.

Meanwhile, French thriller-comedy Bloody Oranges, from writer-director Jean-Christophe Meurisse, follows a retired couple trying to win a dance contest as they are overwhelmed with debt, the minister of economy as he is suspected of tax evasion, a young lawyer who attempts to climb the social ladder and a teenage girl who encounters a sexual maniac. Each of their stories becomes interconnected in increasingly unlikely ways. The film’s ensemble cast includes Christophe Paou (Stranger by the Lake), Alexandre Steiger (The French Dispatch), Lility Grasmug, Lorella Cravotta (Amelie), Olivier Saladin, Fred Blin and iconic French newsman Denis Podalydès. The film was produced by Alice Girard (Vortex, Happening) for Rectangle Productions and Marine Bergère and Romain Daubeach for Mamma Roman.

“I am truly grateful to Dark Star for giving Bloody Oranges the opportunity to be discovered by American audiences,” said Meurisse. “My love for cinema has been built upon a lot of American movies. This feature film has mainly been inspired by three news articles, one of them coming directly from the U.S. I have always had a passion for this part of the world and its cinema, which makes it all the more honorable to present my movie there.”

Dark Star is planning for a March and April theatrical release for Mother Schmuckers and Bloody Oranges, respectively, followed by digital and home video releases later in the year.

“Both of these films have an absurdist, genre leaning DNA that represents the exact kind of features we strive to release,” said Dark Star president Michael Repsch. “They are each so incredibly unique in their voice, yet familiar and oddly relatable. We know that audiences will not soon forget either of these pieces of cinema, and we had to have them in the Dark Star family.”

Both deals were negotiated by Charles Bin and Martin Gondre, of Belgian sales outfit Best Friend Forever, on behalf of the filmmakers and by Michael Repsch on behalf of Dark Star Pictures.

“We are thrilled to work for the first time with Dark Star Pictures,” said Bin and Gondre. “We couldn’t find a better home for both titles in North America. We can’t wait for the U.S. audience to discover those two crazy propositions.”