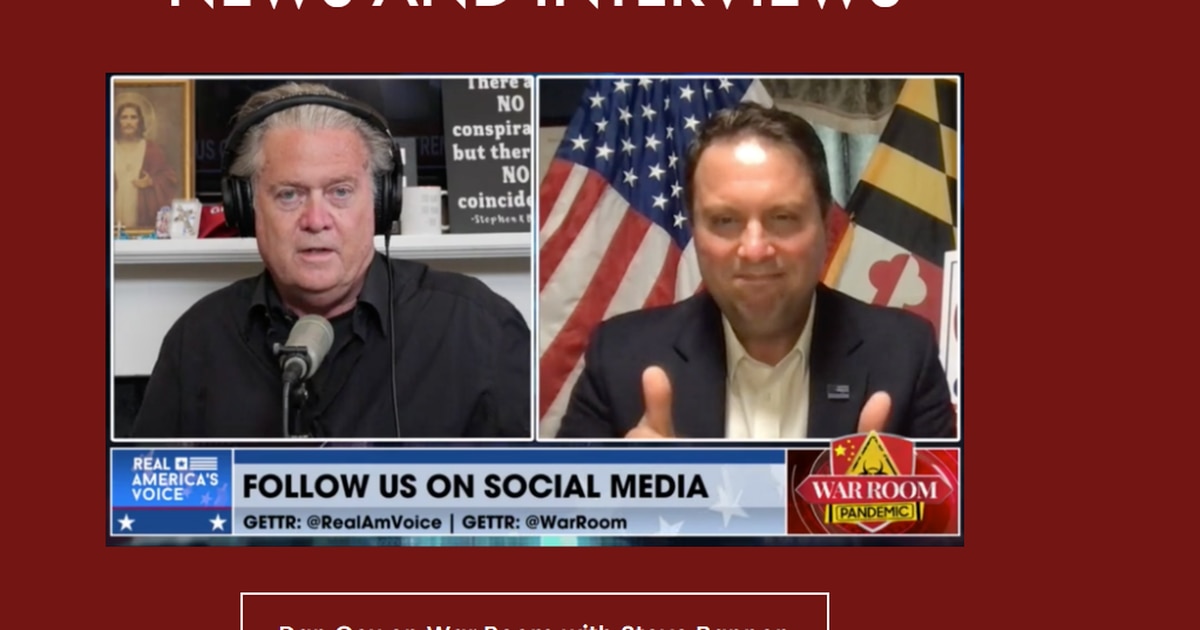 I requested an interview with Dan Cox, but, alas, I have been denied access to the Republican candidate for governor of Maryland. His campaign helpers told me they would make time for a talk like the one I had a few weeks ago with Democratic candidate Wes Moore. But, after raising my hopes, there was nothing but silence from the Cox camp.

“I’ll take that as No,” I wrote in a Monday email to Sallie Taylor, the candidate’s scheduler.

“Yes, you are correct, that is a No,” she replied.

I was not surprised. Across the country, Republican candidates are generally avoiding or ignoring mainstream media this campaign season, opting for guaranteed friendly interviews. Endorsed by Donald Trump, Cox has given interviews to local television and conservative media; he even got time on creepy Steve Bannon’s Internet show.

It’s unfortunate we did not meet because I had 12 questions for Cox. I offer them here on the off-chance the candidate will be goaded into answering them.

1. You have been endorsed by the former president, who keeps lying that the 2020 election was stolen from him. Do you still believe the Big Lie, or do you accept that Joe Biden is our duly elected president?

2. Would you pledge, here and now, to accept the results of our state elections this year and in 2024?

3. In January 2021, you tweeted this: “I am co-hosting two buses to the Million MAGA March/Rally with the Frederick County Conservative Club in support of President Trump @realDonaldTrump on January 6, 2021 to #StoptheSteal.” So I wonder why you recently told the NBC station in Washington, “I didn’t bus anybody”? Did you rent the buses or not?

4. You told the same TV station that getting Trump’s endorsement was “such a blessing.” The former president keeps spreading the Big Lie, it’s possible he illegally took classified documents to his private mansion in Florida, and Saturday at a rally in Ohio he pretty much embraced the QAnon conspiracy craziness. Do you really want the “blessing” of a man like this?

6. Do you give Biden credit for anything, or do you just blame him for inflation?

7. Could you help me out with your repeated references to “transgender indoctrination”? I heard this a few times while listening to interviews you’ve given. During an appearance on Fox 5, when asked about your extreme conservative views, you claimed to be moderate. Let me quote you again: “It’s moderate to have parents back in charge of their children’s education instead of having this pre-K to third [grade] transgender indoctrination.” Where did you get that? Where are such young children being “indoctrinated” as you say?

8. Again in a broadcast interview, you asserted that your opponent, Wes Moore, “says on his website that he will force transgender ideology on students behind parents’ backs.” Can you show me the reference to that because I looked and all I see on Moore’s site is language about making school environments safe for all kids, including those who “identify as LGBTQ+,” so that they are not bullied. What exactly are you talking about?

9. Let’s get to abortion. I realize you are against it, but during another one of your interviews you talked about freedom. In fact, you talk about freedom a lot. I mean, like every sentence practically ends with a claim that you’re all about freedom for Marylanders. Let me quote you again: “We need to make sure that we empower individuals to make their own health care choices between them and their physicians. That’s what makes America great. That’s what makes Maryland a beautiful place to live.” That statement came in the context of pandemic mandates for masking against the deadly coronavirus. You opposed them. You wanted people to have the freedom to choose to wear a mask. But wouldn’t the same apply to women who want the freedom to choose to end a pregnancy under the limits established five decades ago as the law of the land?

10. Regarding the pandemic, you’ve said that Gov. Larry Hogan, and I quote again, “used the power of his office to arrest people for merely wanting to earn a living in their own business.” Come on now. You know full well that businesses that did not shut down were given warnings, that police across Maryland issued very few citations, and actually hundreds of Marylanders asked police to enforce the governor’s executive orders. You acknowledge that, right?

11. You say taxes are too high, and lots of people will agree with you. But you also said, in yet another interview you did not give me, that “250,000 Marylanders left our state because of inflationary taxes just in the last nine years.” Do you have proof of that? I’m looking at census data that shows Maryland’s population at 6.17 million, up 7% in the last decade.

12. OK, one more. You said the following while on an obscure streaming show: “We have natural rights that trump whatever any governor says and whatever the legislative branch puts upon us.” That sounds like a fella who rejects man made laws and who might feel more comfortable living in a cabin in the Idaho panhandle than running the state government of Maryland. Agree or disagree?