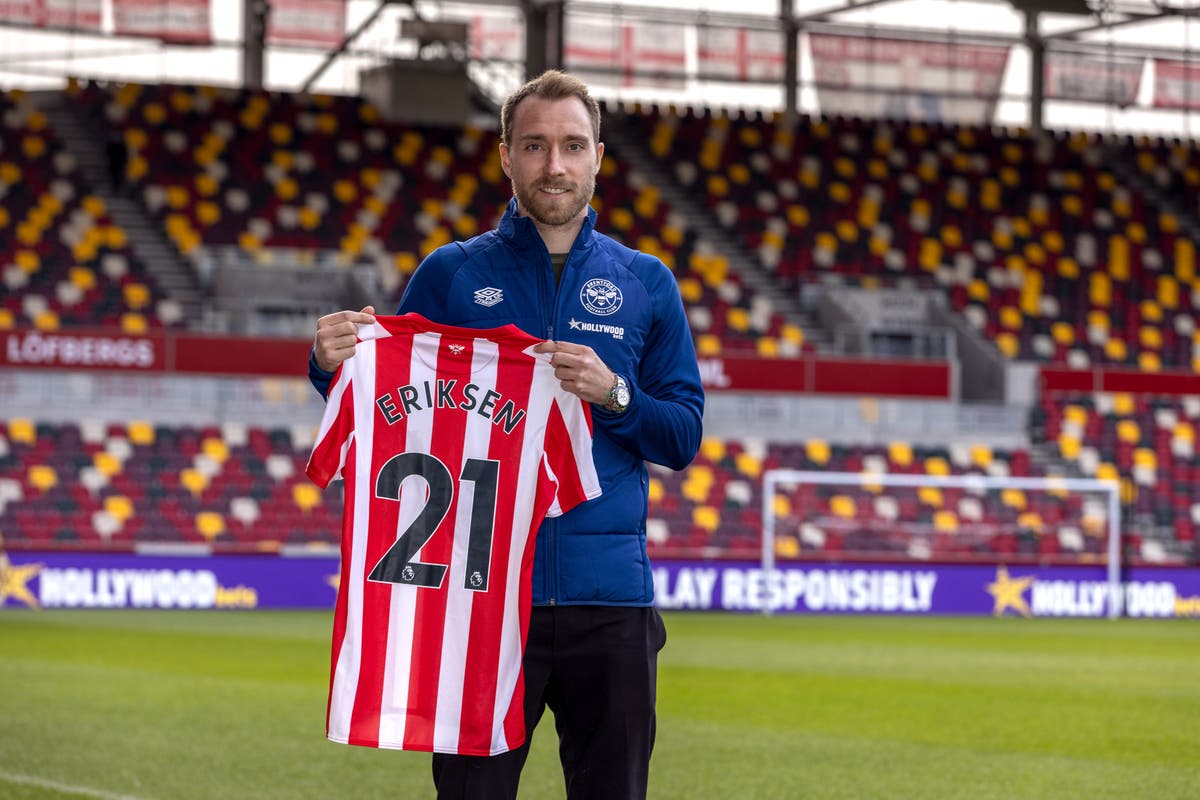 Christian Eriksen says his new Brentford team-mates have not held back in training this week and revealed he wanted to play football a matter of hours after his cardiac arrest last summer.

The Denmark international made a sensational return to the Premier League on the final day of the January transfer window when he joined the west London club on a six-month deal.

Eriksen addressed his new team-mates for the first time on Monday and told them not to go easy on him despite the trauma of the events in June.

“I told Thomas (Frank) when I saw him on Sunday night that I would like to say something to the team on Monday when there is a meeting. There was a meeting before training.

“He obviously said welcome to me as any other new player he would do. Then I said a few words and said I am here because everything has been cleared and secondly, if you have any questions, you can always ask me – but don’t go easy on me otherwise, if there was any concern, I wouldn’t be here.

“I told them that from the beginning and they haven’t held back in training, so I think hopefully they are getting used to it and looking at the footballer, not thinking something happened earlier.”

It has been eight months since Eriksen played a competitive match, with those 42 minutes against Finland in Euro 2020 at Parken Stadium the last time many expected to see him on a football pitch.

After being – in his own words – “gone” for five minutes, plans for his comeback are accelerating, with the playmaker set for a run-out in a friendly on Monday.

It opens the door for a potential competitive return this month, but Eriksen revealed on Friday he wanted to play the final minutes against Finland on June 12 and opened up about his emotions watching Denmark face Belgium five days later in the same stadium.

He added: “It was tough, also because you are in hospital 200 metres away from the stadium where you would have played if this wouldn’t have happened.

“There was a bit of sadness to be looking. At the same time you were annoyed because why did it happen to me? Why didn’t I play, why can’t I play because I feel normal and good, so why can’t I just go out now and play?

“It was a bit of a mix, but it was tough because I wanted to be there, I wanted to play that (Belgium) game.

“Even the Finland game, watching the game in hospital I wanted to play the last 30 minutes, but that is the weird feeling of I haven’t felt anything from what happened. I don’t feel anything bad has happened, I just know it has happened and that is why mentally I was in a good place really quickly, luckily.

“That is also thanks to the doctors. They saved me quickly and it was only something I knew afterwards that it depends on time how quickly you get saved, of course.”

Days after he collapsed, Eriksen had an implantable cardioverter defibrillator (ICD) fitted which would subsequently end his career with Inter Milan, due to rules in Italy preventing athletes from competing with any type of pacemaker.

Having been released by the Serie A champions in December, the former Tottenham star signed for Brentford after he passed the relevant medical checks and has shared many conversations with Daley Blind one of the high-profile footballers playing with a pacemaker.

Eriksen said: “I know Daley Blind, who has one and plays with one at Ajax now. I was in the youth at Ajax and there were two players when I was younger who had an ICD, but I have never seen it in use. That is something that you don’t want to see, but it is lucky it is there to help.

“I spoke to Daley obviously a lot of times about everything – the rehab, the feeling, what it feels like with it, without it.”

The next step for Eriksen will be to follow in the footsteps of Blind by playing with an ICD.

“The only thing that has changed is I think I love my family more than I did before. Otherwise, diet-wise and everything else is the same.

“I don’t know if my family will worry. They have seen how much work I have done and how many tests I have been through, how many things, training-wise, I have done, so hopefully they are comfortable about me playing, otherwise I am sure they would have told me.

“Of course for them and everyone it will be weird to see, me back playing and for me playing will also be weird. They might have extra thoughts but in the end I am here, I am healthy and playing.”