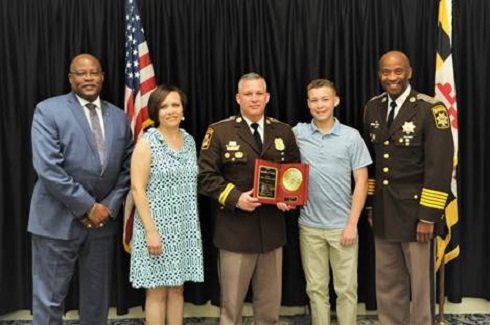 WALDORF, Md. – Sheriff Troy D. Berry is pleased to announce that Director Brandon Foster of the Charles County Detention Center (CCDC) was awarded the DeWitt Award by the Maryland Correctional Administrators Association (MCAA) at a ceremony held earlier this month.

The most prestigious award given by the MCAA, the DeWitt Award recognizes outstanding corrections professionals and their associates.

The award is in honor of former Cecil County Sheriff John F. “Jack” DeWitt, who served as Sheriff of Cecil County from 1974 until 1990. He was known for being well respected by – and showing respect to – all of his deputies and correctional officers, and for instilling integrity in his office.

He had a special way of making people feel comfortable and cared about. After finishing his time as Sheriff, he remained active in Corrections, served as a member on the Maryland Commission on Correctional Standards, and was a supporter of the MCAA. Each year the DeWitt Award is presented to the MCAA member who exhibits exemplary, dedicated service in the field of corrections.

Director Foster is a 25-year veteran of the CCDC. He began his career in 1997 as a line staff correctional officer. Shortly after, he became a staff instructor at the Southern Maryland Criminal Justice Academy. He was promoted to Sergeant in 2004 and supervised recruits in training, and he later served as a sector supervisor in the Custody and Security Section.

In 2006, he was promoted to Lieutenant, overseeing a team of officers assigned to the Custody and Security Section. In 2014, Foster was named Deputy Director of the CCDC and later was named Acting Director until his appointment as Director in 2016.

Prior to joining the CCDC, Director Foster served in the United States Marine Corps as a Staff Sergeant; he was active duty from 1990 to 1995 and in the Reserves from 2003 until 2007.

“We are extremely proud and thankful for the service that Director Foster has given our community and our country,” said Sheriff Berry. “He has worked in every level of Corrections, and has been proven an outstanding leader in his time as Director of the CCDC. He is very deserving of this recognition.”

The Charles County Sheriff’s Office (CCSO) was accredited by the Commission on Accreditation for Law Enforcement Agencies, Inc. (CALEA) in 2001 and has since earned the highest rating of Excellence. Established in 1658, the CCSO is one of the oldest law enforcement agencies in the United States. For more information, visit www.ccso.us.

Charles County Crime Solvers offers rewards of up to $1,000 for information that leads to the arrest or indictment of a person responsible for a crime in Charles County. All individuals who provide tips through Crime Solvers will remain anonymous. Anyone with information about an unsolved crime or the location of a fugitive may contact Charles County Crime Solvers by calling 1-866-411-TIPS. Tips can also be submitted online at www.charlescountycrimesolvers.com or by using the P3Intel mobile app, which can be found in the Android Store and Apple store by searching P3tips. For more information about the P3 program, click on this link: www.p3intel.com.