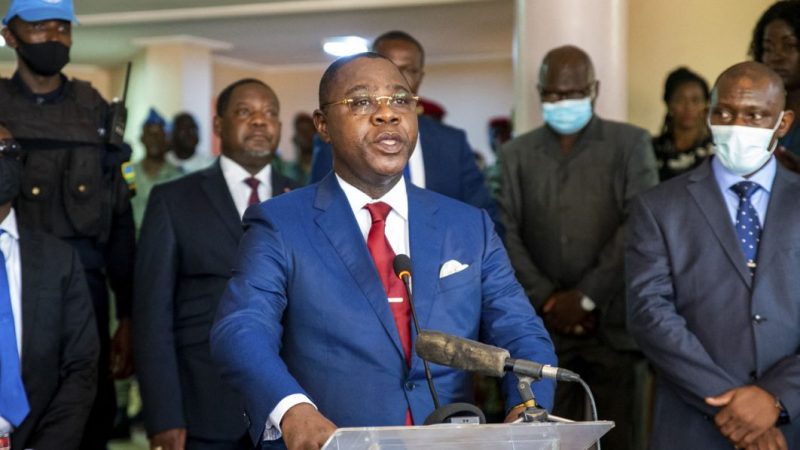 The Central African Republic’s prime minister has been sacked, the presidency confirmed Monday (7 February), against the backdrop of tensions between pro-Russian and pro-French factions within the government of the poor, unstable country.

Henri-Marie Dondra had been named prime minister in June 2021, shortly after Paris froze budgetary aid, accusing it of “complicity” in what it called a Russian “disinformation” campaign against the country’s former colonial master France.

Central African Republic: Prime Minister Henri-Marie Dondra (MCU, centre-left) has been dismissed by President Touadéra, according to the President’s spokesperson. Dondra was reported to have disapproved of the ruling party’s ties with the Wagner Group. pic.twitter.com/4UFpvYBN8Y

President Faustin-Archange Touadéra was attending an African Union summit in the Ethiopian capital Addis Ababa at the time.

Russia’s influence in the Central African Republic (CAR) has increased steadily over the past four years.

In late 2020, at Bangui’s request, Russian military contractors, alongside troops deployed by Rwanda, helped quell a rebellion against Touadéra.

With their help, CAR government forces recaptured much of the two-thirds of the country — and several major towns — that the rebels previously controlled.

At the time of Dondra’s appointment as prime minister he was perceived as more “pro-French” than his predecessor Firmin Ngrebada, seen as more sympathetic to the Russians.

“Touadéra had named Dondra because he was close to international donors and he had good relations with France,” said Roland Marchal, a researcher at Sciences Po university in Paris.

But Dondra had “little control” over the defence and foreign ministers as well as the influential pro-Russian parliament speaker, Simplice Sarandji, Marchal told AFP.

Moloua, the new prime minister, is considered a Touadéra loyalist and a technocrat “with no political profile”, according to a diplomat who requested anonymity.

Trained as a demographer, the 64-year-old was the chief of staff at the economy ministry for eight years before being assigned the portfolio by Touadéra in 2016.

Touadéra is himself a technocrat, educated in France and Cameroon.

Mineral-rich but rated the world’s second-poorest country according to the UN’s Human Development Index, the CAR has been chronically unstable since independence 60 years ago.

A civil war broke out in 2013, pitting myriad militias against a state on the verge of collapse, leaving thousands of people dead and forcing more than a quarter of the population of 4.9 million to flee their homes.

The fighting had lessened considerably in recent years, but it resumed abruptly when rebels launched their failed offensive to overthrow Touadéra.

The UN accused both sides in the fighting of human rights abuses.

The private military contractors are often described as belonging to the “Wagner group” — an entity with no known legal status.

Last week the European Union said it would resume a suspended military training mission in the CAR if the country’s soldiers stopped working for Wagner.

Asked to comment on the Wagner group on Monday during the press conference with French President Emmanuel Macron, his Russian counterpart Vladimir Putin repeated that the Wagner group was a private enterprise and had nothing to do with the Russian state.

EU foreign ministers have slapped sanctions on targets linked to the Russian private military company Wagner, said by Western capitals to being working on behalf of the Kremlin in conflict zones such as Ukraine, Syria and Libya.

Wagner has also offered its services to governments in sub-Saharan Africa, including Mali and the Central African Republic.