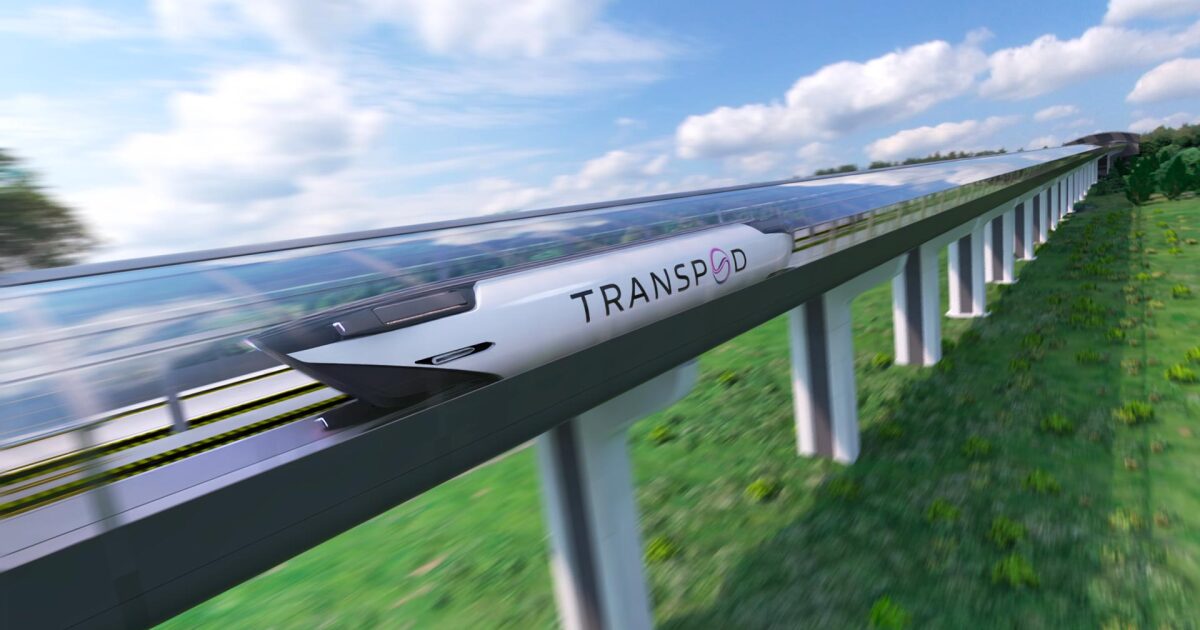 Faster than a jet plane and about half the price. Yes, it’s another hyperloop-style vacuum-tube train – this time from Canada. TransPod says it’s started preliminary construction on a tube that’ll fire you from Calgary to Edmonton in 45 minutes.

At its heart, it’s the same old promise people have been making since pneumatic-tube message delivery systems were the new hotness back in the 1800s. Minimize wind resistance by running a pod in a near-vacuum, and then fire people and goods across the country at speeds that would require insane horsepower and heat dispersal in open air.

As with the Hyperlooop, Hyperloop TT, Hyperloop One, ET3, HyperPort and many other such designs we’ve seen, the FluxJet will eliminate rolling resistance from the equation as well, using mag-lev technology. In this case, though, that’ll only kick in once the train’s out of town and ready to boogie through the high-speed sections. A set of “landing gear” won’t retract until the pod’s doing at least 300 km/h (186 mph) and ready to accelerate up to a cruise speed around 1,000 km/h (621 mph) – or a top speed as high as 1,200 km/h (746 mph) if you’re in a hurry.

The company reveals little about its “groundbreaking innovations,” although we glean that the veillance flux bit relates to a visual positioning system that scans the tube ahead and adjusts the pod’s position in the tube according to what’s coming up. Each 25-m (82-ft)-long pod, seating up to 54 passengers or carrying some quantity of time-sensitive cargo, will have four “levitation engines” extending outwards from its upper and lower diagonals on suspension arms, and as a result it looks totally super cool.

The pods will carry some onboard battery reserves, but when it’s time to go really fast, they’ll extend a contactless power pickup unit to receive power from the tube. Plasma is involved; indeed, it glows a sweet, sci-fi purple in the render video.

TransPod says it’s raised US$550 million in funding, and is moving to the next phase with a project spanning the 300-odd km (186-odd miles) between Calgary and Edmonton. “Preliminary construction work, including the environmental impact assessment, has begun,” reads the TransPod website. This tube, costed at US$18 billion, promises 45-minute trips between the two cities for around US$75, replacing more than three hours of driving, or a plane ticket worth around US$125.

It’ll take almost a third of the traffic off the highway joining Calgary to Edmonton, says TransPod, and every passenger will save so much carbon thanks to its green power that the overall effect will be as if you’d planted a tree. The company expects to reduce carbon dioxide emissions by 636,000 tonnes annually.

Probably the most impressive thing about this project is that TransPod has talked half a billion dollars out of investors. The FluxJet will most likely suffer from the same problems that have plagued every other vacuum tube transport system ever attempted. To briefly summarize:

Now, TransPod’s 18-billion dollar proposal for the Calgary to Edmonton link would appear to cost this project at US$60 million per km – a number that would compete fairly favorably with other high-speed rail proposals in the area. At the end of the day, though, Canada has considered many proposals for fast train travel – but it remains the one G7 nation that’s never built any. It seems unlikely that this will be the first.
Check out a video below.