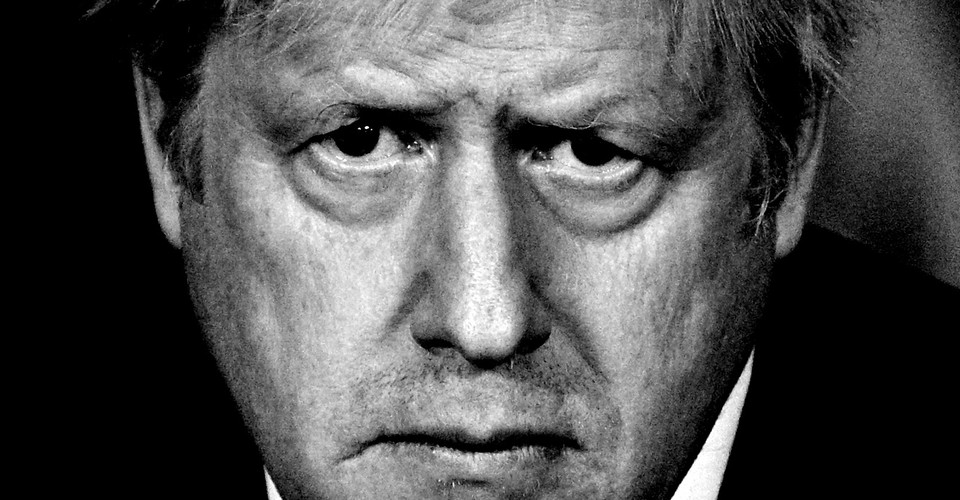 If you wanted to choose a quotation to wound Boris Johnson—a man who wrote a biography of Winston Churchill as a coded advertisement for his own virtues—then this would be it. When Johnson’s fellow Conservative David Davis stood up in Parliament today and said these words, he must have intended them to be a fatal blow. Davis was not comparing the prime minister to his hero Churchill. He was comparing him to Neville Chamberlain, Churchill’s weak, appeasing predecessor.

The quotation comes from a 1940 debate on Britain’s conduct in the dispiriting first months of the Second World War, as Britain failed to defend Norway from a German invasion. The Conservative Leo Amery compared Chamberlain’s attitude toward Adolf Hitler to that of a lion hunter caught sleeping by the lion. “That is, in brief, the story of our initiative over Norway,” Amery said. Then he built to a conclusion that quoted Oliver Cromwell, who overthrew and executed King Charles I. “This is what Cromwell said to the Long Parliament when he thought it was no longer fit to conduct the affairs of the nation: ‘You have sat too long here for any good you have been doing. Depart, I say, and let us have done with you. In the name of God, go.’”

When Davis repeated these words, it was an extraordinary moment. After the rowdy heckling of Prime Minister’s Questions—at which Johnson bullishly defended his record in the face of questions about lockdown-breaking parties—the House of Commons fell silent. Davis is not only a fellow Tory, but a Brexiteer and a former cabinet colleague of Johnson’s; he is also a known maverick with a taste for drama. Everyone knew that he was capable of throwing a grenade. And he did.

Read: What is the point of Boris Johnson?

Johnson’s response was to claim that he didn’t recognize the quotation. Either he was lying or someone else must have written his Churchill book. The day after the Norway debate, Germany invaded France and Chamberlain resigned from office—to be replaced by Churchill. How could a Churchill biographer not know the most famous quote from that pivotal debate?

Then again, Johnson’s entire defense throughout the scandal inevitably known as “Partygate” has been that he was too badly briefed, or simply too inattentive, to realize what was happening under his nose. During Britain’s first strict lockdown, in the spring of 2020, when most businesses were closed to prevent the spread of the coronavirus and regular people were forbidden to mix with those outside their household, Johnson walked out of his office into a group of 40 advisers who had been invited by email to BYOB and mingled with them for nearly half an hour. He did this without, he claims, noticing that he was attending a party.

On his watch, bureaucrats and political advisers also held a lockdown-breaking trivia game in December 2020 and multiple farewell parties for departing officials. One was expected to be so raucous that a staffer was sent to a local grocery store beforehand with a suitcase to fill up with alcohol. Drinking sessions at 10 Downing Street were so regular that staff calendars blocked off “wine time Fridays” and someone reportedly bought a mini-fridge for the office.

Johnson maintains that he was unaware of most of this, and when he was aware of parties, he thought that they were “work events,” even though these were not permitted under Johnson’s own COVID-19 restrictions either. He wants critics to wait for an internal inquiry to establish whether he did anything wrong, and so far his apologies have been brief and unconvincing. Public anger has spiraled, particularly because Britain’s three lockdowns were so strict; those who lost loved ones, gave birth alone, or were prohibited from visiting their relatives in nursing homes feel particularly aggrieved over the revelry in Downing Street.

Read: The party’s over

Step back for a second, and it’s amazing that Johnson has survived this long. Here is a sample of his political record after delivering Brexit: He “lost” text messages that could have proved that he asked a Tory donor to pay for new wallpaper in his Downing Street apartment; he rejected his own ethics adviser’s findings that one of his ministers was a workplace bully; he “crashed the car” by defending a Conservative politician who was found to have broken lobbying rules. He appears to think that ethics rules apply only to the little people. The police have consistently refused to investigate the Downing Street parties, providing an unflattering contrast with the stories of the Britons punished for committing more forgivable lockdown breaches, such as the 66-year-old man with a heart condition who met his friends at his community-garden plot in South London. Already in debt, the pensioner was fined £100 for this. “I did not wish to break the law,” the man wrote in his plea for mitigation. “If you check, I have no criminal record since school over 50 years ago.”

The same is technically true of Johnson, although even the most well-paid lawyer would struggle to describe him as having an unblemished record of integrity until now. Before becoming prime minister, he was sacked twice for lying—once by a newspaper, once by his party leader—and at one point he suggested to an old friend that he would supply the address of a journalist so the man could be given “a couple of black eyes.” As Johnson’s former editor Max Hastings wrote in 2012, “Most politicians are ambitious and ruthless, but Boris is a gold medal egomaniac. I would not trust him with my wife nor—from painful experience—my wallet.”

This is where the “Churchill factor”—to borrow a phrase from Johnson’s biography of Britain’s great wartime leader—comes into play. Defenders of Johnson believe that he shares Churchill’s ability to shrug off scandals and vices that would hamstring lesser politicians. In the country’s darkest hour, Churchill’s mistake-strewn career before the Second World War did not matter, and neither did his drinking or his bouts of depression. The same is surely true for Johnson’s philandering, lying, and disloyalty. None of that was supposed to matter in comparison with the great project of Brexit and the related task of “leveling up” the poorer areas of Britain. But Brexit is done, underwhelmingly done, and the adrenaline rush of Britain’s split with Brussels has been replaced not with the rejuvenation of outlying regions but with never-ending battles over borders, import tariffs, and food standards. Elsewhere in the government, a series of half-baked policy announcements this week only briefly troubled the news cycle. The wider economic picture is chilling: Big tax hikes are coming in April, along with a sharp increase in energy bills. Inflation just hit a 30-year high. How can Johnson rise to these challenges if he is busy explaining that he doesn’t recognize a party when he sees one?

Feeling sorry for Boris Johnson is very hard, but let’s try for a minute. This is a man who has broken the rules throughout his life, and he is now facing a crowd that can’t be wheedled, sweet-talked, threatened, or bribed. To stage a political comeback now would be the most unexpected resurrection since Lazarus’s. The charm that saved Johnson so often has lost its magic, and like many natural bullies, he is oddly cowardly when cornered. Last week, he appeared to hide in the back of his car when leaving Downing Street. He later announced that he was canceling public events because of a family member with COVID, even though the self-isolation rules no longer demand this. One alternative explanation is that he didn’t want to be seen in public during a moment of weakness.

From the July/August 2021 issue: The minister of chaos

The polls look terrible for him. If Johnson survives this week—which is not certain—then he faces more danger after the local elections in May, which are expected to be bloody for the Conservatives. Some in his party are quietly asking members of Parliament to refrain from calling for a no-confidence vote right away—purely so they can call one after the Tories are drubbed at the polls. Why should a new leader suffer such a loss so soon after taking office? Why not make Johnson take all the blame for it?

A simple explanation for why Johnson’s Churchill factor evaporated is that he used to smell like a winner, and now he doesn’t. His fate has a certain poetry. Boris Johnson has finally had the experience that he has inflicted on so many others: being used up and discarded. Unlike his idol—whose successors have aspired to “Churchillian” greatness—Johnson’s name will not become an adjective. The class clown has become a punch line. Johnson surely hopes that Brexit, and Britain’s successful vaccine program, will outweigh his flaws when the historical record is written. But he must be worried that, instead, he will be remembered like Neville Chamberlain: as a man who, for the good of his country, simply had to go.