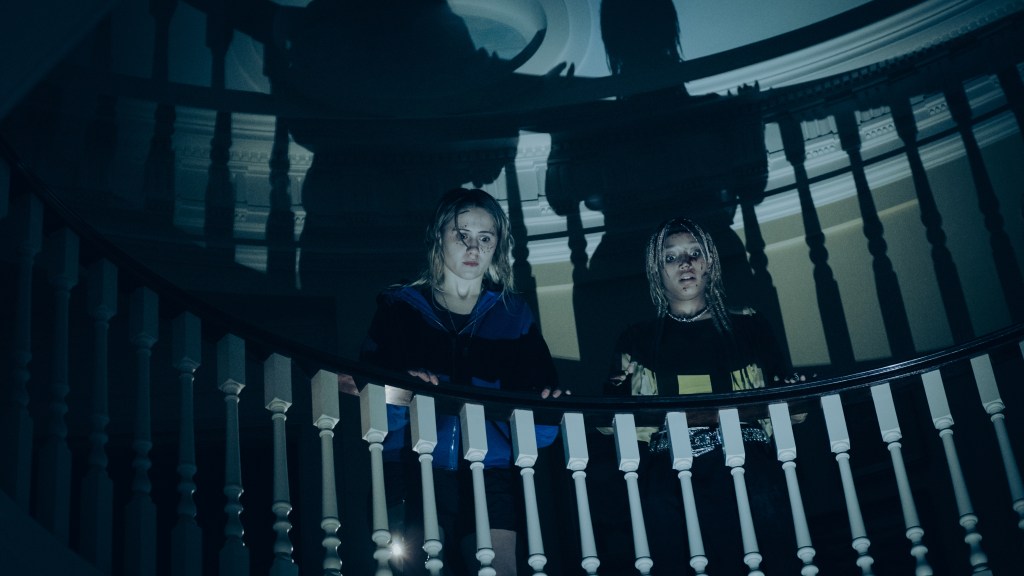 Who could imagine a Gen-Z slasher comedy that would make those “Scream” movies (“Scream 6” is coming at us) look like works of, well, semi-intelligence? “Bodies Bodies Bodies” is a dim mass murder entry from art house company A24, the distributor of the Academy Award-winner “Moonlight.” Directed by Netherlands-born Halina Reijn and scripted by first-timer Sarah DeLappe with a story by Kristen Roupenian, “Bodies Bodies Bodies” begins like a cabin-in-the-woods film, except this cabin is a mansion owned by the unseen parents of one of the young protagonists.

Sophie (Amandla Stenberg, “The Hate U Give”) and her new lover Bee (Maria Bakalova, “Borat Subsequent Moviefilm”) make out not very passionately and arrive at the home owned by the parents of David (It Boy Pete Davidson). He and his actor girlfriend Emma (Chase Sui Wonders) are relaxing underwater at the bottom of the pool, along with podcaster Alice (Rachel Sennott, who deserves a better film) and Alice’s maybe Afghan veteran, pickup boyfriend Greg (Lee Pace). A hurricane is headed their way, ahem.

Sophie and Bee are upstaged by their cellphones, a sign of things to come. In tight shots, anything not in focus is out of focus, another sign. Sophie’s ex Jordan (Myha’la Herrold) makes a bold play for Bee, who weakly resists. Jordan advises Bee to “Be careful.” I wasn’t sure if that was a pun. Bee is the only woman who is working-class, although that does not explain why she eats forkfuls from an entire chocolate cake (perhaps it’s a metaphor). Maybe everyone gets their own cake.

After Greg cuts the cork off a bottle of champagne with Dave’s father’s gurkha sword, the gang decides to play the game “Bodies Bodies Bodies” In it, people pretend to kill other people in the dark. The “dead” people are then found by other players, who shout “bodies bodies bodies.” I could not be bothered to remember any more of the rules. The storm causes the lights to go out. Could it stop the movie?

Half of the film is lit by cellphones, a technique I found even more irritating than when I first encountered it 20 years ago. In one scene, Davidson shows up in pink shorts and hoodie like a sacrificial victim. I liked Davidson for a minute when David tries to convince Emma that the word “gaslight” doesn’t mean anything. But this is a step down from his work in the more reputable “The King of Staten Island.”

Greg tries badly and repeatedly to explain to his new friends the meaning of the proverb “The best defense is a good offense.” A drinking game involves the characters slapping each other, perhaps in an effort to out-jackass those “Jackass” films. If I heard one more person say, “Oh, my God,” I was going to plotz.