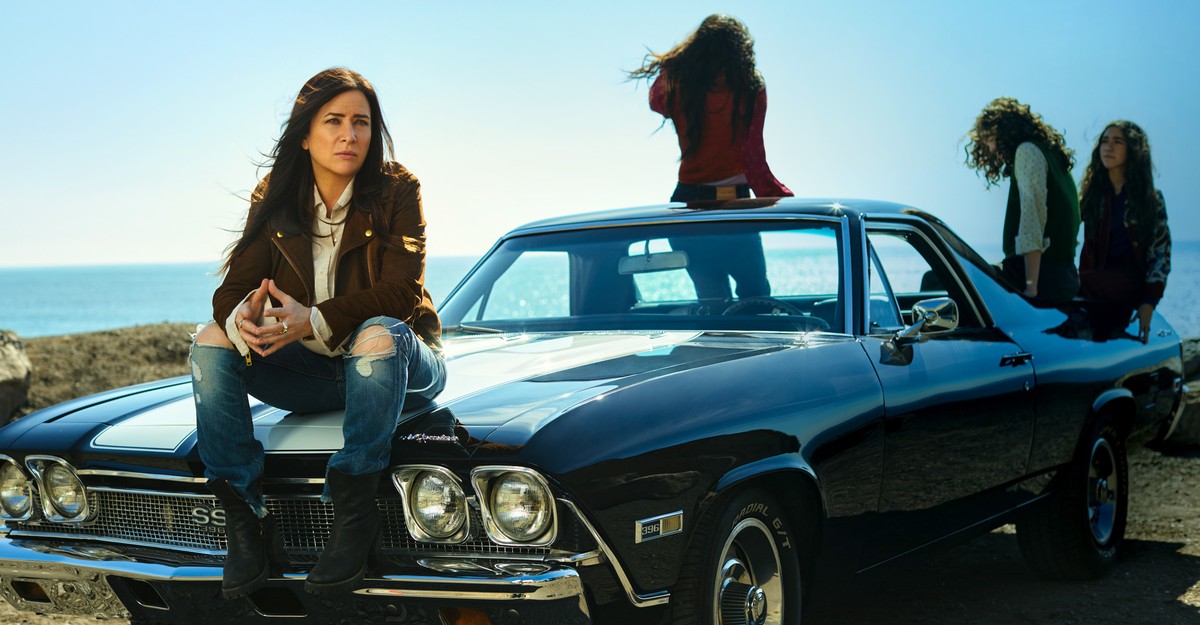 Over five seasons of television, Pamela Adlon’s FX series, Better Things, has been a tribute to keeping on when you can’t anymore, and to all the people—many of them women—who carry their families because no one else will. The show is about, Adlon told me in her gravelly drawl over Zoom last month, “this woman who constantly almost gets her foot in the door, but then the door closes, and it’s funny, and it doesn’t kill her. She keeps moving because she has to.”

Sam Fox—played by Adlon, and so freely based on her the two seem nearly indistinguishable—is an actor in Los Angeles. Her career as a minor child star has shifted into lucrative but unfulfilling voice-over work and a handful of cult-favorite roles that occasionally get her accosted out in the world. She’s financially supporting three children, an elderly mother, and a feckless ex-husband, to whom Sam sends alimony payments that seem to eat at her like a disease. “It’s a lot,” Sam says at one point during a rare moment of defeat. “And some mornings, I just … lay in bed in my room, and I stare at the ceiling, and I just say, ‘I just can’t do it anymore. I just can’t, I just can’t, I just can’t.”

What’s so thrilling about Better Things, though, is how Sam endures. The show doesn’t see her transcend her struggles so much as transform them, witchily, into something greater, and more optimistic. In Season 2, after Sam’s kids refuse to acknowledge her career, she storms out of the house, returning to find that her friends have helped set up a mock eulogy in which her children confess how much she means to them, and explain why they’re so mean to her. “I needed to give her some of my pain,” says Frankie (Hannah Riley), the spiky middle child who can be cruelest of all, “because I knew she could carry it when I couldn’t.”

The series is named after a Kinks song that insists better things lie ahead, but Adlon isn’t so naive. Far from looking past the exhaustion and loneliness of single motherhood, she mingles them with moments of joy and rage and strange beauty—a family dance sequence choreographed to Christine and the Queens, for example—that can rip you apart emotionally. Many of these scenes are lifted wholesale from her own life. “When it’s something that’s personal and feels uncomfortable,” she said, “usually that’s something that I should go towards, because that’s always going to pay off really well, if it’s making your heart race.”

Adlon told me she had no confidence when she first started the show. She’d never directed a minute of television; now she’s directed every single episode since the second season, and will soon start work on a movie. Her growth—and the show’s growth—is noticeable. I recently rewatched the pilot, and although it’s darkly funny, it feels like a much more conventional series about the entertainment industry—a bit like Entourage if Vincent Chase’s posse of dependents were hormonal teenagers and a wacky, caustic British mother. Adlon co-created the series with the comedian Louis C. K., and when allegations of sexual misconduct emerged against him in 2017, she considered abandoning the series, before deciding to continue on her own. The irony wasn’t lost on anyone: A show about a woman managing a family and a career by herself was almost sacrificed to a man’s abuses of power. But in running the series on her own, Adlon got to prove how striking her creative intuition was—how offbeat and radiant the world could be through her eyes.

In a medium that loves to overemphasize its intentions, Better Things is notable for how much it withholds. Plot threads are dangled and yanked away, sometimes for a season, sometimes forever. Characters remain elusive, explained only in shreds of flashback. (Sam’s most compelling love interest in the series is a married man played by Mather Zickel, saved in her phone as “Nobody.”) Scenes follow one another erratically like fragments of time; images and objects recur without being explained, relying on the viewer to connect them, or not. In Season 5, which debuted on Monday, not much actually happens, but the things that do are threaded together by themes that have bloomed throughout the series.

Read: The redemption of the bad mother

From the very beginning, the season delves into heritage, synthesizing ideas about motherhood, pain, and endurance that have long pervaded Better Things. In its first episode, Sam and her brother, Marion (Kevin Pollak), visit a genealogist. (Adlon is a fan of the PBS show Finding Your Roots and says she wrote to the host, Henry Louis Gates Jr., to tell him she was basing a character on him. Gates was apparently disappointed that the character wasn’t played by Denzel Washington.) Sam and Marion learn that a Ukrainian cousin named Clara married a man called Anatoly whose mother eventually turned Clara and her children over to the Nazis. After they were executed, Anatoly remarried and had nine more children. The story is true; Adlon discovered it when she had her own family tree traced. “All of those lives, all of those people,” Sam says as they’re leaving the genealogist’s office, stunned. “That makes me feel like we’re a part of a greater chain of history and humanity, like the past and the future. It gives me confidence somehow.” Marion’s response is simpler: “Fuck Anatoly’s mom.” The expression becomes a kind of absurdist refrain between the two, used to shrug off calamity. “Fuck Anatoly’s mom!” Sam replies, joyfully, and with feeling.

For a show that never quite grew the audience it deserved, Better Things tended to reach the people who found it the most meaningful—the ones, like Sam, who know what it’s like to not have the luxury of falling apart. But if Sam’s great victory as the show comes to an end has been simply keeping everything together, Adlon’s has been turning the weight of working single motherhood into art. When Adlon encounters fans, they sometimes “lay themselves bare, and they’re like, I just need to tell you this,” she said. She remembers the time she met the singer-songwriter Randy Newman at a premiere and rhapsodized over what one of his songs meant to her family. “He was like, [Emotionless voice.] ‘Thank you,’” she said, making a face. “So when people see me, and they start to speak about the show, I just say, ‘C’mere.’ I give them a hug because that’s really all you can say, because you’ve shared it. It’s hard to describe what the show means to people, because you’re trying to describe your own feelings.”