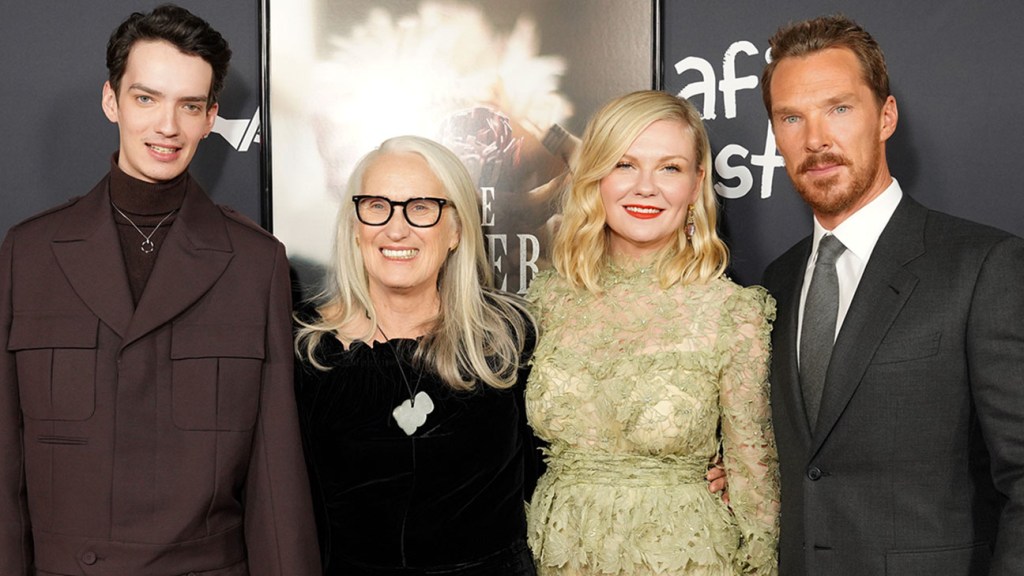 “I fucking love my job, and we’re so lucky to do it,” Benedict Cumberbatch declared on Thursday night during a Q&A inside TCL Chinese Theater following the AFI Film Festival premiere of his latest film, The Power of the Dog.

Cumberbatch made the statement as a way to express displeasure for how often actors talk about suffering for the craft. His experience is the opposite, especially on the Jane Campion film that casts him opposite Kirsten Dunst, Jesse Plemons and newcomer Kodi Smit-McPhee. Based on the novel by Thomas Savage, Power of the Dog finds Cumberbatch playing Phil Burbank, a charismatic yet troubled rancher who torments his brother (Plemons), his surprise sister-in-law (Dunst) and her young son (Smit-McPhee).

“There’s so much catharsis in what we do,” Cumberbatch continued, while seated center stage on the panel alongside moderator by Kathryn Hahn and his colleagues on the film, Campion, Dunst, Smit-McPhee, editor Peter Sciberras and cinematographer Ari Wegner. “Whatever you go to or whatever you use of yourself, forget pain. You’re able to express pain. How often are you able to do that if you experience real pain in life in those situations?”

That’s not to say that he didn’t go through something uniquely emotional. Campion asked Cumberbatch to employ the Method acting technique and not break character while they were filming. “Ben and I talked about it, and I could see that he felt a lot of pressure at befriending every member of the crew and that just was not going to serve him, me or the film,” Campion told THR on the red carpet before the screening. “I said, ‘Look, we should do this old school, and you should stay in character.’ He was nervous that everyone would hate him, but I said that does not matter. It doesn’t matter to Phil, and it’s not going to matter to you.”

The two agreed, and Campion introduced Cumberbatch to the cast and crew with a little warning. “I said, ‘This is Ben. He’s really nice, but you’ll find that out at the end.’”

Smit-McPhee called the process “fascinating” to observe, particularly for him as he shares some of the most intense scenes with Cumberbatch’s Phil in the film. “Obviously, Benedict is so far from the character that he plays, Phil, who is quite cruel in his nature and narcissistic and has a lot of trauma in him. Benedict is an apologetic, lighthearted, beautiful, fuzzy Englishman. It was amazing to see that spectrum, but if anything, it really had a very positive domino effect on us all, in terms of actors and on the set overall, to stay in a certain mood and to keep it in this kind of hostile nature. We needed that to convey these messages that are very strong within the story. I enjoyed it.”

For Dunst, she told THR that her prep was buoyed by the two weeks of rehearsal prior to filming. “But my big challenge was trying to make my own monster in my brain because Benedict and I don’t really have scenes together, so all of the fear and anxiety that he gives me, I had to create that. I drew upon a lot of old things about myself or how other people would make me feel,” she explained.

Speaking of feelings, Dunst admitted that she was a bit bummed that Plemons, her real-life partner, left L.A. earlier in the day and couldn’t join for the premiere. “I’m so sad he’s not here. I FaceTimed him in the car [on the way over],” she said, adding that the pair are already talking about what they can work on next together after a previous collaboration on Fargo. “He’s my favorite actor to work with.”

Dunst is one of Campion’s favorites. During the Q&A, the auteur said she’s been “in love” with Dunst since watching her critically-acclaimed turn in 1999’s The Virgin Suicides. “Seriously, in love. And then Melancholia. She’s an actress I was deeply interested in. I love her, and she is that brilliant actress. She has to just put clothes on a line, and I’m riveted.”

Cumberbatch also made sure to spread the love back to Campion’s way, praising her as the perfect creative partner. “I felt incredibly held aloft by Jane. I’ve never worked so closely in parallel with a director to find the resources to play a character but to also to delve into the psyche of a character to curate something with care and ownership and reverence for the original material,” he explained, adding that matched his desire for a new challenge while staying just as “vulnerable and scared” as he was to jump into the unknown.

Though he dismissed the suffering for the craft conversation, Cumberbatch did admit that there were difficult days. And a couple that called for him to fully disrobe for nude scenes. “I’m literally exposing myself in this film, and that’s interesting,” he said of the scenes that find his character bathing in a river in rare and revelatory moments of peace for his tormented character. “But I guess the most painful thing to me, if I’m fucking honest, is trying to pretend I can play the banjo. [My character] is someone who has done it all their life, and I’m trying to master it in 4 weeks or something stupid. That’s tough.”