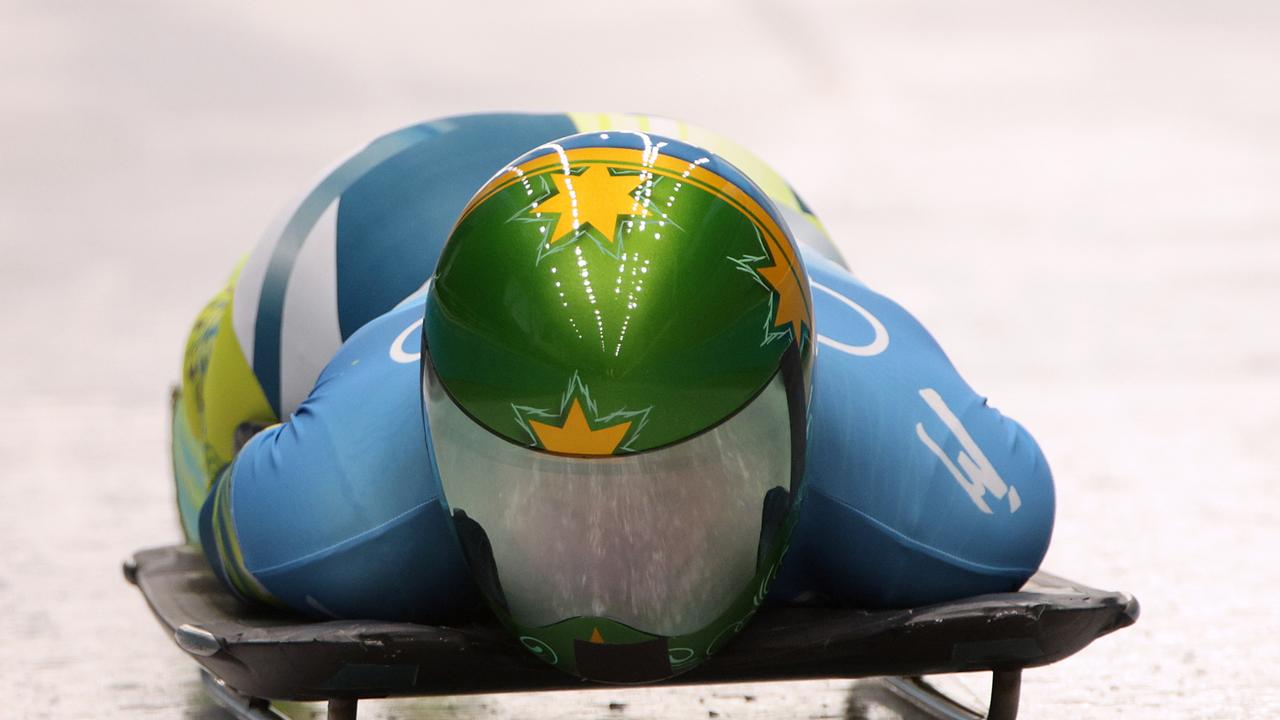 An Australian is in the box seat for a shock gold medal at the halfway point of one of the craziest sports at the Olympics.

Australia’s Jaclyn Narracott is two runs away from winning a historic gold medal in the women’s skeleton at the Beijing Games.

The outsider finished 0.21 of a second ahead of Germany’s Hannah Neise, but will have to hold her nerve overnight ahead of two final runs tomorrow.

The 27-year-old put together a superb performance in his second run at the Secret Garden Olympic Halfpipe, but Hirano blew away the competition with a near-perfect final run, scoring 96.00 to claim gold.

Australia’s Jaclyn Narracott is in the box seat at the halfway mark of the women’s skeleton taking a shock lead after the first two runs with a combined time of 2:04.24, narrowly 0.21 of a second ahead of second-placed Hannah Neise from Germany.

The final two runs will take place on Saturday evening, and Narracott stands as a genuine medal chance if she can replicate the performance tomorrow.

The Channel 7 commentators were blown away by the result, which could lead to Australia’s first ever sliding medal.

“We are going to have an Australian leading at the halfway mark of the women’s skeleton. I can’t quite believe what I’m seeing,” Alister Nicholson said.

“Jackie Narracott of Australia is in the gold medal position through two heats of women’s skeleton. She won a World Cup, became the first Australian slider in any discipline to win a gold medal at a World Cup in the St Moritz recently. And here she is on the biggest stage at the Winter Olympics in a sport we barely had any competitors in over the years.”

Australia’s best ever skeleton result was 10th in 2010.

Narracott said she was “stoked” by the performance.

“It was just calm and fun,” Narracott said. “I was just flowing with it and doing everything that I knew I needed to do to come down that close. It is unreal.

“And then to be sitting in first after day one is more than I could have hoped for, dreamt for. Obviously you dream of this but to be sitting here is cool.”

Narracott almost had a career ending concussion after PyeongChang, which was followed by Covid and move to the UK.

She said the sacrifice has paid off so far, even though she hasn’t seen her 2-year-old nephew.

While skeleton is not a hugely popular sport in Australia, there will be 25 million new experts as of 11.20pm on Saturday night and 1am on Sunday for the final two heats.

A mind-blowing run from Japan’s Ayumu Hirano has denied Scotty James a gold medal in the men’s snowboard halfpipe final, but the Australian champion will return home with a silver medal around his neck.

James, who is a three-time world champion and four-time X Games gold medallist, is widely considered one of the greatest at his craft, but he couldn’t quite put together the gold medal performance required on Friday.

It was a bittersweet outcome for the 27-year-old, who claimed bronze at the 2018 Games in PyeongChang.

Countryman James and Japanese star Ruka Hirano both crashed out in their opening run, while gold medal contender Ayumu Hirano nailed a frontside triple cork, sending an early warning to his competitors. Meanwhile, American champ Shaun White sat fourth with a score of 72.00.

Guseli improved on his score in the second run, registering a 79.75 to provisionally slide into third spot, but White put together a phenomenal run of 85.00 to knock the 16-year-old Aussie out of the top three.

But James blew away the competition with his second run, nailing a frontside 1440 on his final trick and receiving a monster score of 92.50 to slot into top spot.

“That was unbelievable … Scotty James has just thrown down one of the most crazy technical runs we have ever seen.”

In response, Ayumu Hirano produced an impressive score of 91.75, nipping at the heels of James. Boos echoed around the venue when the Japanese phenom’s score was unveiled, with several pundits suggesting he should not have placed behind the Aussie.

White’s final run didn’t go to plan, meaning the American’s career comes to an anti-climatic conclusion, missing out on a medal finish in Beijing.

Guseli finished in sixth, a more than solid result for the Aussie teen on Olympic debut.

James stumbled on his third and final run, meaning his best score of the day remained 92.50, which Ayumu Hirano would have to beat in his last attempt for the gold medal.

And in a late twist, Hirano stunned the Beijing crowd by registering a whopping 96.00 in his final run to snatch the gold out of James’ hands.

“He has dropped an absolute bombshell here,” Tomlinson said.

James declared after the event: “Did our best, that’s what matters.

“I hope people don’t think that I’m at all disappointed. I’m absolutely incredibly over the moon. I came out and gave it my best shot,” he later told Channel 7.

“I don’t have too many words for it right now, I’m absolutely thrilled.

“It came down to the last run … It really could have been anyone’s today and I think that’s the most exciting thing.”

Sports reporter Mark Gottlieb posted: “Wow! Absolutely gutted for Scotty James but Ayumu Hirano’s final run was insane. The Japanese rider deserved gold. Another medal for Scotty James and he should be so proud of that silver.”

Japanese ski jumper Sara Takanashi issued an emotional apology on social media after she was one of five athletes disqualified for violating suit regulations at the Beijing Olympics this week.

“I am very sorry that the chance of winning a medal has been taken away from the Japanese team,” Takanashi, who has a record 61 World Cup wins on her resume, said in an Instagram post.

“It is an undeniable fact that my disqualification changed everyone’s lives. Even if I apologise the medal will not be returned.”

Takanashi was disqualified from Monday’s Olympic mixed team competition due to the size of her suit, which was determined to be two centimetres wider than permitted around her thighs, according to Reuters.

Japan’s National Olympic Committee has not yet addressed the situation.

Olympic gold medallist Nils van der Poel has accused the Netherlands speed skating program of “corruption” over a report that its officials tried to influence the ice makers to set up conditions that benefit Dutch athletes.

Van der Poel made his scathing comments during a news conference at the Olympic Village on Wednesday, three days after his victory in the 5000 meters gave Sweden its first speed skating medal since 1988.

“This isn’t my idea of fair play,” van der Poel said. “The Olympics is higher, stronger, faster. This is corruption. This is trying to alter the field of play in your favour by using unethical and immoral means.”

Van der Poel said he had read an article on a Dutch website that suggested the world’s strongest team is using a scientist to try to make sure the Ice Ribbon oval is set up to its advantage.

While saying he has confidence in Mark Messer, who oversees the ice, van der Poel said the Dutch program deserves to be punished if the report is true.

“This is the biggest scandal in our sport,” he said. “We have doping cases in our sport every now and then. I do not see how this is any less serious.”

“Measuring the ice temperature has been going on for 20 years,” Hendriks said in Dutch media. “And anyone who comes to the skating rink more often sees that all countries have contact with the ice master.”

The Netherlands has won three of the first four events at the Ice Ribbon and claimed a total of six medals — matching the combined total of every other country. The Netherlands also dominated speed skating at the last two Olympics.

America humiliates China on its own turf

The United States spoiled Olympic hosts China’s first-ever appearance in men’s hockey with an 8-0 thrashing as the geopolitical rivals faced off in a wide-open Beijing tournament lacking NHL glamour.

The National Hockey League’s late decision to keep their superstars away from Beijing because of Covid sent heavyweights Canada and the US scrambling to assemble squads that are heavy on youth and light on experience at the international level.

But the young Americans had no trouble with a Chinese side packed with US and Canadian players who signed up to skate for China in the Olympic hosts’ maiden appearance in the event.

Sean Farrell, a 20-year-old who plays for Harvard University, whipped in three goals in a long night for China’s US-born goalie Jeremy Smith.