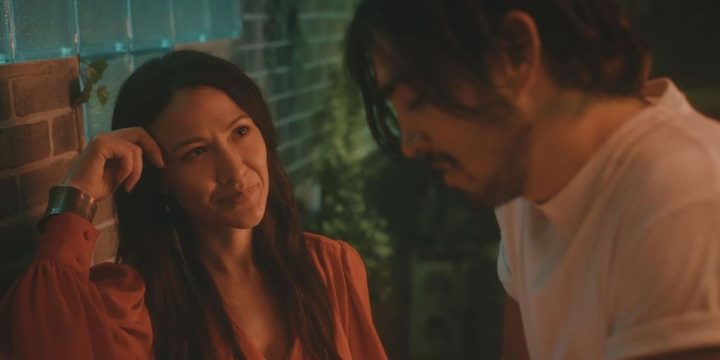 Filmmakers are challenging the way Indigenous love stories have previously been portrayed with the release of two projects that explore romantic relationships and sensuality at this year’s Toronto International Film Festival.

In “Stellar,” from Anishinaabe writer and director, Darlene Naponse, two people seek comfort and connection during a single night in a dive bar as they watch the world outside of them rupture from a window.

The film is an adaptation of Naponse’s short story by the same name and stars Elle-Máijá Tailfeathers and Braeden Clarke in the title roles of She and He.

Naponse says she wanted to showcase the strength of touch in community — an act that was tarnished by the abuses carried out in the residential school system and the Sixties Scoop.

The project departs from a trauma narrative often seen with Indigenous characters in film and television and instead reclaims the importance of physical connection to First Nations communities.

“It was really about wanting to understand, celebrate and explore that beauty of falling in love and touch,” said Naponse.

The connection between the two characters provides a pathway for a new narrative — one that shows touch can restore the past while bringing hope to the future.

Tailfeathers, who is Blackfoot and Sámi from Kainai First Nation, joined the project after Naponse reached out to her directly for the role of She.

5:56
Liem dines with the stars

Liem dines with the stars

There is a desire for more stories of love, intimacy and healing because they are concepts that have been stripped away from Indigenous Peoples for many generations through colonialism, she added.

“Just thinking about the radical act of love and joy and what it means to feel as an Indigenous person today knowing everything we’ve been through. There’s something so radical about the capacity to feel love, joy and hope. It’s a beautiful act of reclamation,” she said.

The queer love story is set in Toronto in 2011 two years after Tamil-Canadians across the country protested the Sri Lankan government’s treatment of Tamil citizens. It follows a Tamil woman and a Mohawk and Iranian woman, as they navigate familial responsibilities, displacement and newfound love.

5:28
Liem takes a look inside the hotels of the stars

Liem takes a look inside the hotels of the stars

In the film, Kawenniiohstha has just moved from Kahnawake Mohawk Territory to the city to attend school. Unknown to her mother she is also looking to connect with her Iranian father for the first time. She meets Malai, who is grappling with the notion of reconnecting with her alcoholic father before it’s too late while encouraging her brother to do the same. The two women develop a relationship after a fateful encounter at a laundromat and a lost notebook.

Nayani co-wrote the film with Mohawk actor Devery Jacobs, most recently known for her role in the FX dramedy “Reservation Dogs,” and Iranian actor and writer Golshan Abdmoulaie.

“We’re in the long, extended season of ‘trauma dramas.’ I want there to be joy, hope and a sense of possibility because we deserve that,” Nayani said in an interview.

“When I look at my communities I see those kinds of love stories. I see queer folks and other folks of colour just falling in love and having these conversations every day. This is everyday life for us.”

Through sharing stories and life experiences the three writers found even though they came from different cultural backgrounds there were similarities within their communities.

Nayani came up with the premise of the film nearly a decade ago when a family friend approached her and asked about the significance of protesting on stolen Indigenous land.

It was a question Nayani had herself after participating in protests in Toronto in 2009 following the events in Sri Lanka.

“It really showed me how much I lacked a relationship and maybe sense of responsibility to Indigenous communities here as someone whose family arrived here for some semblance of safety,” Nayani said in an interview.

The filmmaker then posed her own question, “what happens when you have an Indigenous woman and a woman who is the daughter of refugees come together?” Nayani wanted to explore what those conversations look like.

Tamil actor Priya Guns stars as Malai. She was living abroad when she was first sent the script.

Guns says she was drawn to film because it put the realities of BIPOC people in the forefront and explored elements of class and queerness.

“Right away, I’ve never seen anything like this,” she said in an interview.

“I feel like if I had seen this film growing up, a lot of things would have made sense.”