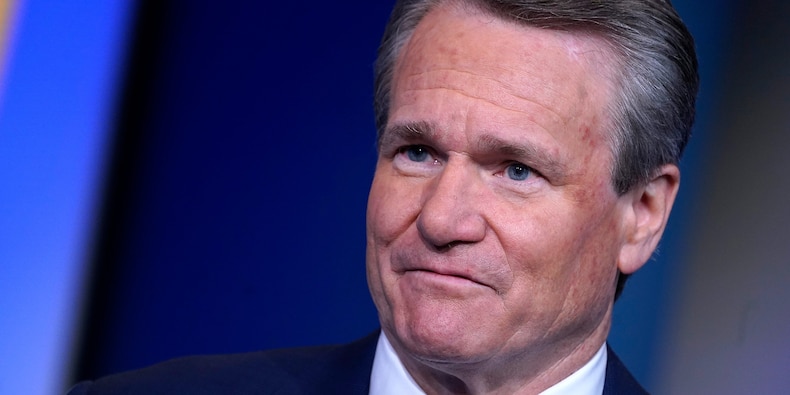 The second-biggest US lender reported $22.1 billion in managed revenue, just below Bloomberg consensus estimates of $22.2 billion. Fourth-quarter profit rose 28% to $7.01 billion, or 82 cents per share, beating analyst estimates of 75 cents a share.

“Our fourth-quarter results were driven by strong organic growth, record levels of digital engagement, and an improving economy,” CEO Brian Moynihan said in the earnings release. “We grew loans by $51 billion and added $100 billion of deposits during the quarter, further strengthening our position as the leader in retail deposits.”

The bank said its strong numbers were a result of higher asset management and brokerage fees and the impact of strong loan and deposit growth.

Here are the key numbers:

The bank said improved credit quality allowed it to release reserves of $851 million, and provision for credit losses improved to $489 million as a result of a recovery in the macroeconomic environment.

The consumer banking segment was the standout performer, raking in revenue of $8.9 billion. Bank of America said it added more than 900,000 new consumer accounts, a jump of 64% compared to 2019.

The lender has recently benefited from the prospects of higher interest rates – a Federal Reserve tool to temper inflation – which allows banks to start charging more for loans. But this narrative has been somewhat dented after banks began disclosing the impact of wage inflation on results.

Read More: Jonathan Edwards’ fund had its best year in the last 18 in 2021. Here’s how he claimed a spot atop Wall Street’s top 5, and 3 stocks he says are still cheap.