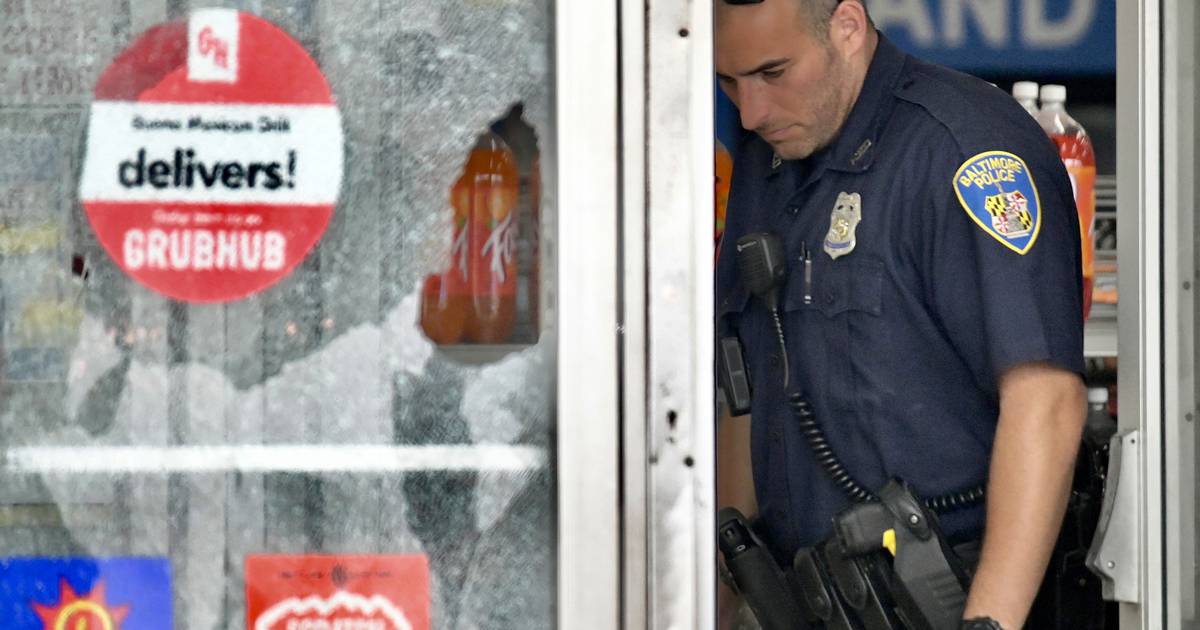 The budget, which includes $560 million for city police and an additional $65 million in education spending, will ultimately include $500,000 less for the city’s sheriff’s office and $196,000 less than requested for the Baltimore Office of Promotion & the Arts, or BOPA.

Council members voted narrowly to reduce the funding for Sheriff John Anderson following a contentious budget hearing this week when members lamented the office’s eviction practices, including posting notices on shared doors and declining to answer questions for tenants over the phone.

The council divided 8-7 on the vote, with some members arguing the money can be used to fund guaranteed counsel for tenants and others, led by Council President Nick Mosby, calling the move “performative” and “political.”

The amendment to BOPA’s funding was more widely supported. Council members were unsatisfied by an explanation from the leaders of the group about how money dedicated to canceled or scaled down Artscape festivals during the pandemic was spent. Artscape was canceled in 2020 and 2021, but the city provided funding to BOPA anyway.

The council said the money, part of BOPA’s $2.6 million budget, will be restored at a later date if additional information is provided by the quasi-governmental agency.

The agreement tests the waters of the City Council’s soon-to-be-established powers to increase or reallocate funding in the city’s budget. Until now, the council has been able to cut money from the budget but not reallocate it. That will change July 1 with the start of the 2023 fiscal year as a charter amendment takes effect.

Once it was amended, Council members voted unanimously for the spending plan. Minutes later the Board of Estimates also approved the measure and Scott called the budget a “big win for Baltimore.”

Thursday’s vote capped a contentious budget season, with several hearings extending long into the night as members of the City Council grilled agency heads on police spending and quality of life concerns voiced by residents.

Recycling collection and the city’s current biweekly schedule for pickup proved to be a major source of consternation. Council members demanded a plan from the Department of Public Works for a return to weekly collection, but left a nearly six-hour hearing unsatisfied by answers provided by Director Jason Mitchell.

A group of six council members, led by Councilman Eric Costello, kicked off budget discussions on a divisive note, delivering letters to the Baltimore Police Department, State’s Attorney’s Office and the Mayor’s Office of Neighborhood Safety and Engagement with a lengthy list of demands. Calling recent violence in the city “beyond comprehension,” the council members held a news conference to call on police to deliver a short-term crime plan to address a rash of shootings that had claimed the lives of a pregnant woman, her finance and a high school junior at an after-prom party.

“Our residents and communities need relief, and they need it now,” Costello wrote in his letter to police.

Police delivered a plan calling for increased use of overtime to create a more visible police presence in high-crime areas. Officials also pledged to ramp up efforts to serve more outstanding arrest warrants and target “the most violent drug organizations.”

The department’s 2023 spending plan calls for eliminating 30 vacant sworn officer positions and replacing them with 35 civilians who would help investigate some cases by tracking down leads and searching databases. It also seeks to add nine officers to staff a new Group Violence Reduction Strategy, which uses a “focused deterrence” model to identify people most likely to become involved in gun violence and give them a choice between support services and increased attention from law enforcement.

Baltimore’s American Rescue Plan spending also came under fire from the City Council during budget talks. Members questioned whether any of the city’s backlogged or stalled services would be restored by the city’s $641 million pot of federal funds and expressed concern about how various agencies are handing out the money.

Members complained that the Department of Public works had yet to receive any ARP money, about 75% of which has already been allocated by Scott’s administration.

The 2023 budget does not increase taxes but does include an increase in the city’s water rate. Water and stormwater rates increase 3% under the new spending plan and sewer rates will go up 3.5%. The increases were previously approved by the city’s Board of Estimates.

The fiscal year 2023 spending plan for the first time includes $65 million in additional funding for education mandated by legislation known as the Kirwan bill, which reformed education spending across the state. Spending mandated by Kirwan will continue to grow annually, jumping to $77.2 million by fiscal year 2024 and to a projected $155.4 million by 2030.

New EMS revenue proved crucial to the city funding Kirwan reforms in their first year. Maryland is allowing local jurisdictions to start getting reimbursed for Medicaid patient ambulance rides. Previously, reimbursements were provided for Medicare patients as well as patients with private insurance, but very little was received from Medicaid.

For the first time in several years, the 2023 budget stems many of the losses to tourism revenue sustained during the pandemic. Tourism funding, which comes from parking fees, hotel taxes and the city convention center, is expected to improve to 85% of pre-pandemic levels in fiscal year 2023.