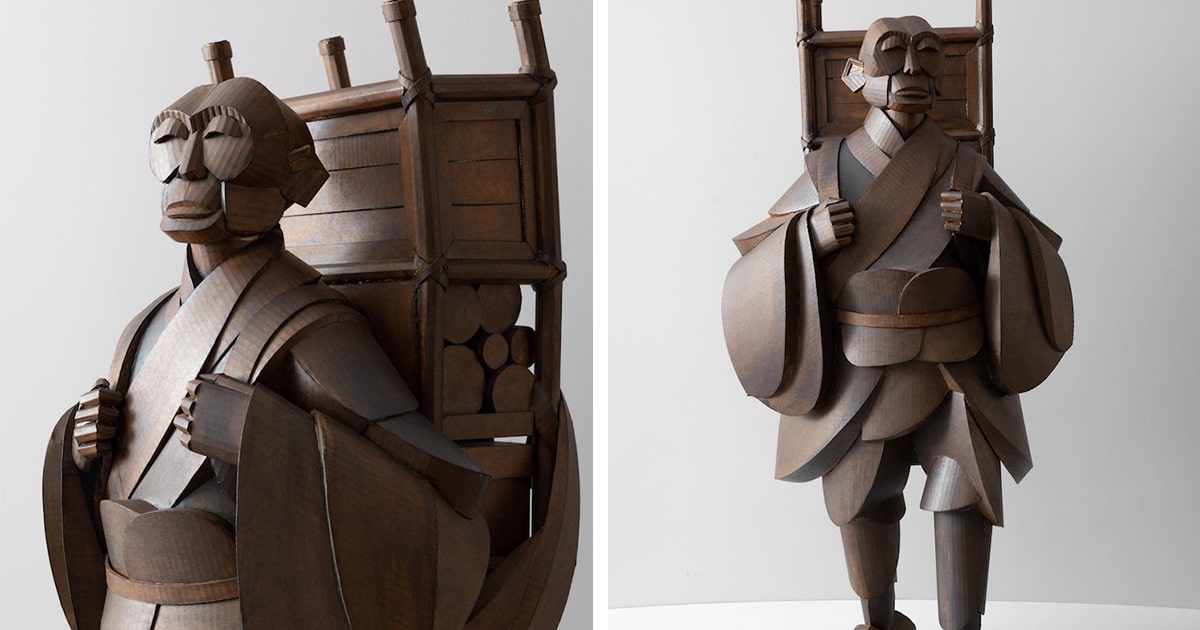 Artist Warren King reimagines the possibilities of cardboard in his series of figurative sculptures. Although they resemble the texture and sheen of wood from afar, these three-dimensional works of art are actually carefully constructed from cardboard that has been cut and folded to create mesmerizing planes and angles. The inspiration for these striking statues comes from King’s Chinese heritage.

“I don’t have any sort of formal art education, but I’ve always had some interest in drawing and building things,” he explains to My Modern Met. Prior to becoming a full-time artist, he worked as an engineer and then in software for many years. It wasn’t until he began making props for his children’s school theater productions that he was exposed to sculpting with cardboard. “About eight years ago, I was taking a sabbatical from work and decided to try making some human figures. One thing led to another, and now I’m doing art full time.”

Creating figurative sculptures soon became a way for King to get in touch with his ancestry. “Having grown up in the Midwest as a child of immigrants, I didn’t have much exposure to my cultural roots,” King continues. “So I use my art now as a means to reconnect to that part of my history.”

Many of his pieces are based on real people that he has met during his travels to China or in his day-to-day life living in NYC’s Chinatown. “The first series of figures that I made were based on people from my parent’s hometown in China, and later I did a series based on family stories,” he adds. “I recently moved close to the Chinatown neighborhood in NYC, and my latest pieces have been inspired by the vibrant community of people living and working there.”

Some of King’s work will be on view at Pearl River Mart in Soho in 2023. You can keep up to date with his latest projects by following him on Instagram.

He began constructing these pieces eight years ago during a sabbatical.

King’s art is inspired by his family roots.

Many of the figures are based on people from his parent’s hometown in China.