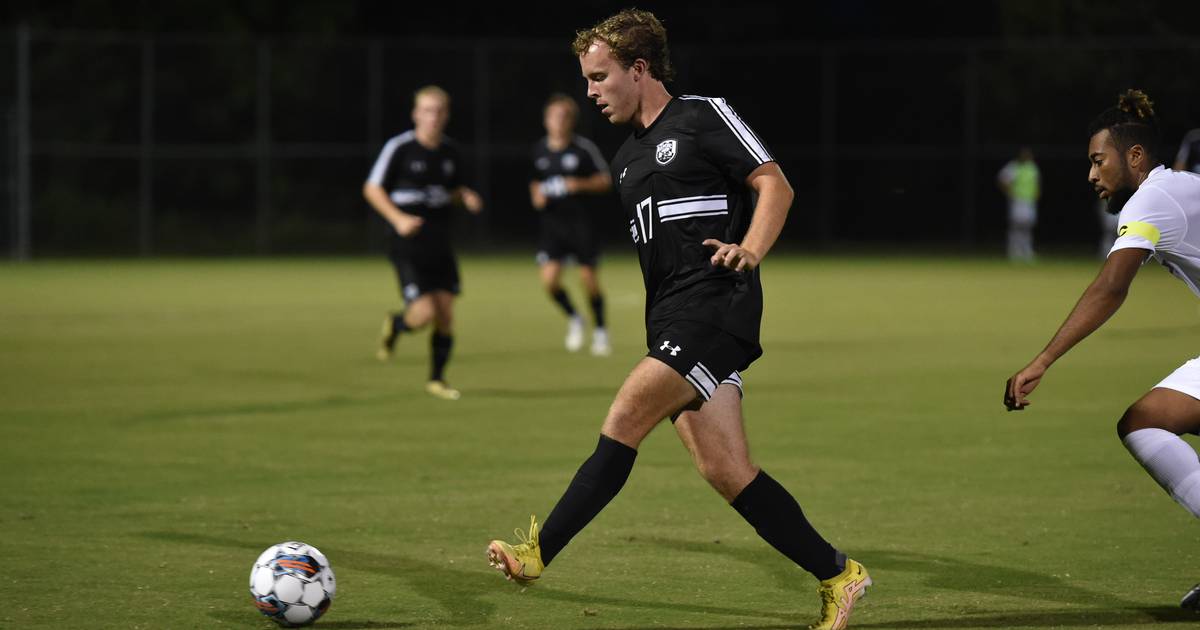 Shortly after UMBC men’s soccer forward Spencer Hanks absorbed the devastating news that his 2021 season was over before it began due to a torn ACL, MCL and meniscus in his right knee, his head was spinning.

Fortunately for the Odenton resident and Arundel graduate, he could turn to a valuable and close resource: teammate and fullback Jordan Ehart, who was rehabbing his own torn right ACL and meniscus.

“I had a lot of questions,” Hanks recalled. “What graft do you use for surgery? How long did it take you to get back? What’s surgery like? What’s rehab like? It was unlucky that Jordan was injured, but I was lucky to have him as someone I could go to and talk about it, and he would give me answers.”

“It was kind of nice that we had each other because we were both going through the same thing and we could talk about what we were going through and we went through it together,” said Ehart, a Severna Park resident and Mount Saint Joseph graduate. “So that was really helpful.”

Healthy once again, Ehart and Hanks have returned to fortify a Retrievers team that at 4-0-0 is enjoying its best start since the 2013 squad opened the season with nine consecutive wins. They meet Fordham on Friday at 6 p.m.

Hanks has amassed five goals and one assist, tying for the national lead in goals and ranking second in points, and has contributed to an offense that is tied for second in the country at four goals per game. Ehart has strengthened a defense that has surrendered a total of four goals.

Their return has been a welcomed sight for coach Pete Caringi Jr.

“Last year, there was a lot more doubt knowing that those guys were out along with four or five other guys,” said Caringi, the architect of a UMBC program that has captured a total of seven America East regular-season and tournament championships and advanced to the NCAA College Cup in 2014. “You almost went into every game wondering, ‘Who’s going to play? Who’s going to start?’ Now, having them back gives you more confidence.”

Ehart had been down this road before. In the waning minutes of a 2-0 loss at Albany on Oct. 27, 2018, Ehart tore the ACL and meniscus in his right knee.

Unlike the first time, Ehart played for another 10 minutes after tweaking his knee during a game with FC Baltimore Christos in June 2021. The ability to walk around under his own power and lack of pain had him convinced that he had not sustained a recurrence — until an MRI three weeks later confirmed the tears.

Had surgery yesterday for a torn ACL and meniscus. Never imagined I would be back in this position and have to go through this again… gonna be another long and tough road, but I can’t wait to get back on the field next year to prove myself again and make up for some lost time 💪🏼 https://t.co/Sp2IGGotsJ pic.twitter.com/c2uWokvSss

“I remember the doctor told me, and I didn’t hear anything she said after that,” he said. “I was just in shock. My mouth just dropped. That was the worst feeling ever.”

During a painful 7 1/2-month rehab process in 2018, Ehart had informed his parents he would walk away from soccer if he suffered a similar injury. But Ehart, who had been tabbed a captain earlier in 2021, changed his mind.

“I didn’t want to finish my soccer career on an injury,” he said. “I wanted to be able to finish the game and walk off the field on my own terms.”

Cleared in late April to run again, Ehart re-joined FC Baltimore Christos in the summer to regain his form and his fearlessness.

“I feel like if I’m thinking about it and feeling scared that I’m going to get hurt, then something might happen,” said Ehart, a senior who graduated in May with a bachelor’s in media and communication and is enrolled in a master’s program concentrating on entrepreneurship, innovation and leadership. “If I just go out there and am confident in my abilities, then everything will take care of itself.”

Caringi said Ehart’s return has been especially critical because he is a calming voice on defense.

“Jordan is an anchor in the back,” Caringi said. “Unfortunately, he’s been injured, and he’s always had to come back and recover. But you can see it in his eyes. You could see it in him last year when he was around the players and see how anxious he was to come back. I think when you lose a leader like Jordan who does it on the field and is a typical Baltimore player that is a hard-nosed player and plays to win and has won championships, we missed him a lot, and having him back is tremendous.”

Unlike Ehart, Hanks knew something was wrong when he heard a pop in the knee while playing in a club tournament in New Jersey. But that hardly prepared him for the idea of sitting out the entire 2021 season.

Like Ehart, Hanks attended every home game, trying to will his teammates to victory. It was about as much as he could do under the circumstances.

“That was probably the toughest thing for me, just watching the whole year and sitting here and not being able to help the team out,” he said.

After getting medically cleared in May and playing a summer slate with his club team, Hanks kicked off his 2022 debut by scoring three goals and adding an assist in an 8-2 romp over Fairfield on Aug. 26. That performance — the first seven-point outing by a Retriever since Pete Caringi III finished with eight points on four goals against Hartford in October 2012 — stunned even the junior majoring in American studies.

“I didn’t think I’d score a hat trick, but I like to think that I’m confident in myself and know that if I had a chance, I could score,” he said. “But a hat trick, that was crazy.”

“I think you have to have more than one goal scorer to be really successful,” he said. “Last year, Taylor was our main goal scorer, and Ryan Becher was scoring goals, but Ryan also played more of a defensive role for us. Not having Spencer in the lineup and not having that go-to goal scorer puts a lot more pressure on the guys up there.”

Both Ehart and Hanks said missing the 2021 campaigns gave them a greater appreciation for the game.

“There’s days when you’re tired, and you’re like, ‘Oh man, I don’t want to practice,’” Ehart said. “But now I’m just blessed to be out here and can’t take anything for granted because in an instant, it can all be gone.”

UMBC has not won a conference title since 2014. Junior midfielder Tyler Harry said that drought could end as long as Ehart and Hanks are on the field.

“We are a deep team, and we have a lot of guys that can contribute,” the Perry Hall resident and Archbishop Curley graduate said. “But with these two being main contributors to the team, it’s so important for them to stay healthy and provide those goals and that leadership and that presence. We know mentally how important they are.”