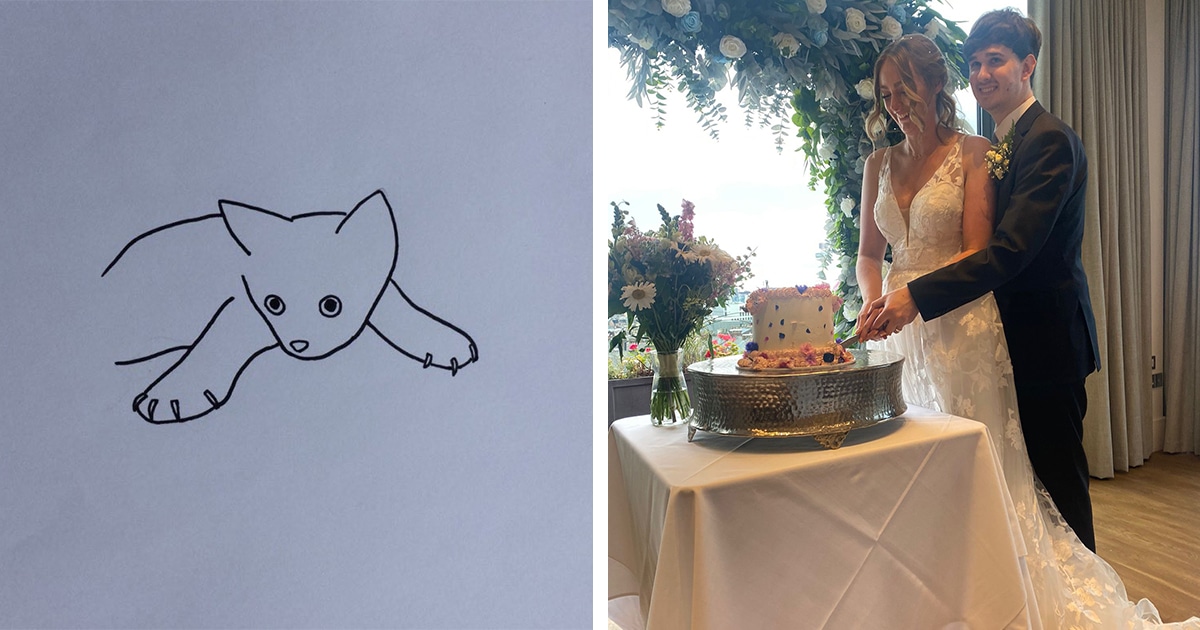 poorly drawn cats made this for emma and i and it’s truly the most gorgeous beautiful piece of art i’ve ever seen pic.twitter.com/vrcoaITBFE

Three years after meeting online, a British-American couple finally tied the knot. Although long-distance relationships are nothing new, the way these two people were brought together—through a portrait of a cat—is as unexpected as it is endearing.

Based in Oregon, Grant Schroeder reached out to the popular Twitter account poorly drawn cats in 2019 to commission a drawing of his own kitten, Luna. The artist behind the account, Heloísa Nora, is known for her minimalist-style renderings of felines and created an illustration of Schroeder’s cat based on his photos. After she posted it on her account, Emma Ferguson from Liverpool, UK, noticed the image. Ferguson had her own cat named Luna and decided to follow Schroeder on social media.

“I saw a pic on his account of him holding his Luna. Cute boy with cat—must follow, of course!” Ferguson says. After seeing the follow notification, Schroeder checked out her profile and the two began chatting. “So I then messaged her on Twitter, saying, ‘Hey, your cats are cute,’” Schroeder recalls. “We then just started talking about our cats, getting to know each other, and eventually we started FaceTiming every day and slowly fell in love with each other.”

With Schroeder living in the U.S. and Ferguson based in the UK, the two developed their relationship mostly through the internet. Then, in January 2020, they finally met in real life when Schroeder spent a couple of weeks in Liverpool.

Of course, after their first reunion, the COVID-19 pandemic hit and travel was restricted around the world. As a result, they were not able to visit each other again until a year later, in August of 2021. Months passed, and the pair got engaged on New Year’s Eve.

“It’s nice what we can do with the internet these days,” Heloísa Nora, the artist behind poorly drawn cats, said. “I would’ve never imagined that a cat drawing would result in a beautiful story.”

Schroeder and Ferguson were married July 24, 2022, and now live together in the UK with two cats and plan on adopting a third. “I just thought I’d get to see posts of his cat on my timeline,” Ferguson said. “I got a lot more than that, and I’m very glad I did.”

nearly 3 years ago @poorlycatdraw drew me a picture of my baby Luna. After she shared it with her followers, Emma stumbled upon it and we started talking. Yesterday, we got married!! I can’t thank Heloísa enough for bringing us together. 1st poorly drawn wedding?? pic.twitter.com/aoySmpHNvd

Emma Ferguson, a woman from the UK, saw the portrait of Schroeder’s cat and followed him on social media.

Thank you @poorlycatdraw for drawing my luna so perfectly!!! I love it pic.twitter.com/TRphWCN5xK

She also had a cat named Luna and reached out to him.

So in looooove with my husband x pic.twitter.com/vjfxk3zPpI

The pair began messaging and FaceTiming, and eventually started a long-distance relationship.

married the best woman i could ever ask for💙 pic.twitter.com/hL6aaVtLpz

Three years later, Schroeder and Ferguson got married and now live together in the UK with two cats.