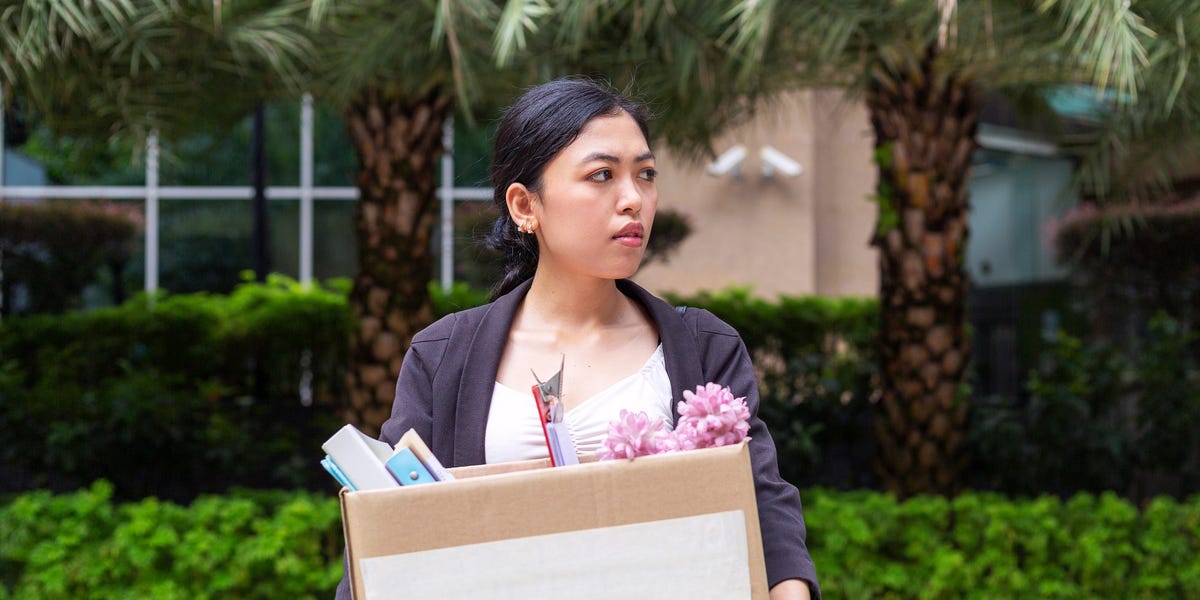 Hanna Da’Mes had it all figured out. She majored in English, landed a prestigious internship at a top-five publishing house in New York City, and accepted a full-time position as an editorial assistant at The Center of Migration Studies of New York.

Then, the pandemic sent Da’Mes back to her parent’s home in Boulder, Colorado, where she left the editorial industry behind to become a freelance surface-pattern illustrator.

“I finally had the time and energy to explore what I had loved as a child and discovered that when I didn’t have work, I turned to art,” she told Insider.

Starting over in a new industry wasn’t easy. Da’Mes picked up three part-time jobs as a barista, a layout editor for a small-town newspaper, and a substitute teacher at a preschool.

After buying an iPad and teaching herself Procreate, she opened an Etsy shop where she sold prints and stickers with her designs. Almost a year later, she’s now able to support herself on client commissions and Etsy alone.

Da’Mes is one of the millions of Americans who quit their job during the pandemic, fueling what has become known as “The Great Resignation.” The phenomenon was coined by Texas A&M psychologist Anthony Klotz who said “pandemic epiphanies” have inspired one in four workers to leave their jobs in 2021.

Insider spoke to six people who successfully pivoted careers this year — here’s how they did it.

1. Highlight your transferable skills and network

“I leveraged my skills that weren’t very industry-specific. For example, I had to work in a very ambiguous environment and create processes for myself … that’s the sort of thing that I would leverage in my interview experience. Also, doing your due diligence and speaking to people in the industry will be really beneficial. It doesn’t have to be on LinkedIn, it could be someone that you played soccer with in college or an old friend.”

“For me, I wasn’t doing anything rash, it’s something I sat with for several months. I basically tried to do both things until I reached a breaking point. And then at that point, it was pretty clear which one I wanted more. You have to really sit down and ask yourself if you are comfortable with that kind of risk … explore your identity and how you want to spend your day. Really think about the pros and the cons.”

“There are free courses on YouTube and that can give you a lot of experience, so you can try the area out a little bit. I think before you invest in a course, you have to try and check if it is really for you. Trying some projects by yourself and studying for free gives you a little bit of an insight into what the correct career is and if you can go through with it.”

4. Create a budget and fallback plan

“Figure out your budget — how much money you need to spend on your mortgage, your utilities, food, debt, all your expenses. How much can you comfortably live with while you transition to your new role? Make sure you have at least six months of savings. If it’s possible, having a part-time position you can lean on is super helpful so that anxiety can be kept at bay. Then with the worst-case scenario, figure out at the beginning what to do if you run out of money. Will you sell your car? Will you default to your 401k? Will you sell your stocks? What type of skills can you lean on to make money in a part-time capacity?”

“Have a good attitude. That’s just one thing I always try to live by, trying to smile and keep a good attitude and knowing that even if you fail you can do better. Just try to learn and know that you’re going to stumble, but then you just get yourself back up.”

“My advice for people who are worried about the stability of a creative freelance job is to do something that I didn’t do: keep your full-time job until you have some confidence that your freelancing jobs will get a little steadier … I think a smart way of doing it would be to keep your full-time job, develop your portfolio as much as humanly possible, and work on expanding your network and telling people about what you’re doing … There’s no shame in staying at a 9-5 job if it means security.”