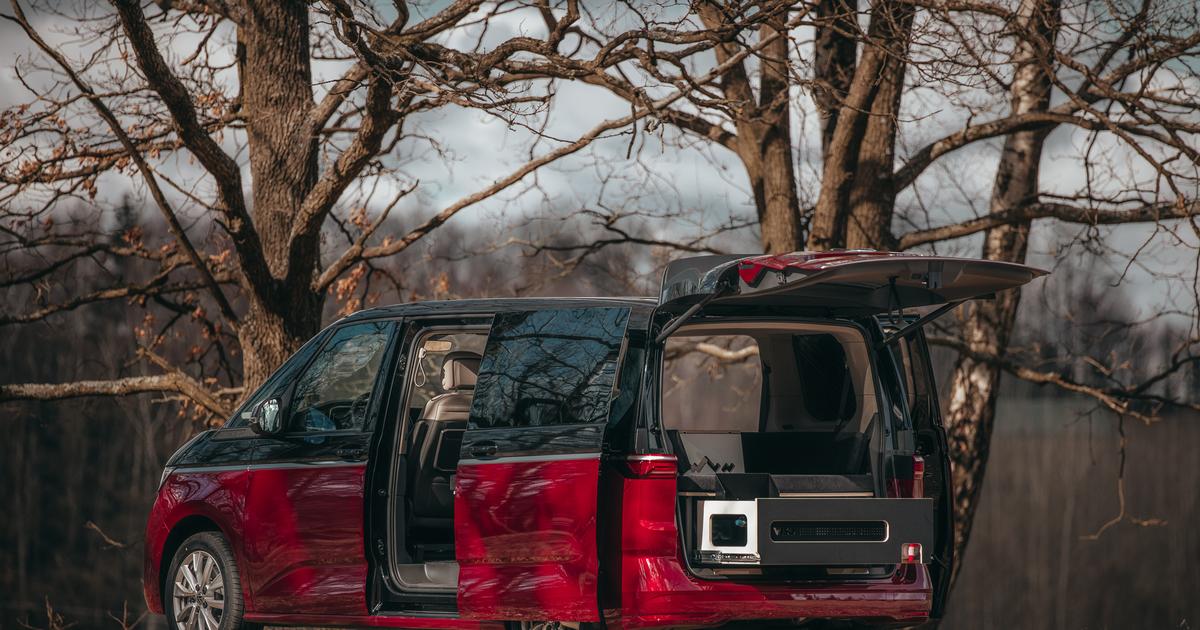 Since debuting last year, the new Volkswagen T7 Multivan has had the potential to be one of the smartest, slickest VW camper vans ever. Classic floor rails, newly split individual third-row seats, a multifunctional table, an available plug-in hybrid powertrain and semi-autonomous highway driving – what about that package isn’t optimized for road trips and in-vehicle living? Czech company Visu becomes one of the first to make the T7 camper a reality, adapting its homey camper kit to VW’s latest Multivan. The Visu T7 becomes a nomadic powerhouse with bed, indoor dining lounge, outdoor kitchen with convertible grill, and plenty of organized storage.

Visu didn’t have to dig too deep to transform the T7. Its preexisting lineup of camper kits provided a big head start, and with a little tinkering it had a kit for the new Multivan.

The company prefers not to call its conversion package a simple camper box, thinking bigger in terms of creating a space travellers can call home – a warm, secure safe haven to retire to after a rough day on the road or a harrowing adventure in the wild. That’s not an easy goal to accomplish with a kit that installs and uninstalls inside the walls of a midsize van, but we think Visu has done an admirable job with the package it calls Moie.

Central to Visu’s vision of “home” is a space to gather, relax, converse and break bread, a space in which one wants to spend time, not just sleep and cook. Many (not all) camper kits merely have an outdoor kitchen and folding bed, leaving campers to sit outdoors or in the vehicle seats. Visu adds a hinged central panel to its sleeping platform that raises up and forms a table with help from a removable leg. The two sides of the sleeping platform work as benches to complete the central lounge.

Like other small van conversion shops, Visu optimizes space by using a slide-out kitchen that stores below the bed. It adds extra versatility by way of a portable gas grill that combines a grill top with a stove burner. Campers can cook directly on the grill or remove it and use the stove to cook with a pan, pot or kettle.

A foldable windscreen sets up behind the unit to work as a backsplash and protect the mattress cushions. The grill even includes legs so it can easily remove and cook away from the vehicle.

Visu skips the integrated sink in favor of a 15-L canister with a spout accessed via a face panel cut-out. In between the grill and water, the large storage space fits Visu’s 35-L aluminum crate, encouraging campers to pack all their dishes, utensils and tools at home and simply drop the crate into the kitchen. Both the water compartment and center cargo area have hinged lids that work as a countertop.

The Moie bed sits atop a laser-cut metal frame that doubles as a storage area. The seven bed cushions match hinged, CNC-cut plywood panels that flip out of the way to access the included soft-sided storage cubes fitted neatly inside the frame members. So even though the conversion takes up a bulk of the load area, there’s still dedicated space for luggage and gear.

The multi-piece Moie kit is meant to install and remove with ease, freeing up access to the Multivan’s everyday driving utility and flexibility when a camper interior is not needed. Its kitchen component ratchet-straps down to the floor tie-downs, and the side benches install via strap hooks, tool-free hand screws and frame braces.

The center table/bed panel then drops and screws into place, the cushions go on, and the install is complete. The process will certainly take the average Joe longer than the two minutes of the instructional video, but it looks quite straightforward.

Visu launched the Moie a year ago, and while it didn’t have to completely reinvent the kit for the T7, it did rework it around the new van’s dimensions, creating the Moie 04 for the T7 and only the T7. It offers separate Moie variants for older VW T5 and T6 vans, as well as other variants for a full list of midsize vans from automakers like Fiat, Ford and Mercedes. The Moie kit starts at €3,930 (approx. US$3,940) and seems like a nice, cost-effective way to turn a regular T7 Multivan into a capable little camper and back again.